Anyone dubbing their mountain biking playground ‘Bike Kingdom’ does so knowing that they’re setting expectations royally high. Go down this path and, it’s safe to say, you are putting some considerable pressure on yourself to deliver something truly memorable for people. All of which leads us to the big question of the day… does Bike Kingdom in Lenzerheide live up to its name? In short, yes.

Over the course of this guide, we’ll cover everything mountain bikers need to know in order to plan a successful visit here. From where it is, to the kind of you trails you can expect, to accommodation, local guides and much, much, more. It’s all here, in one handy place. Let’s get to it.

Where is Bike Kingdom Lenzerheide?

You’ll know this already by now, but Bike Kingdom is in Lenzerheide. Lenzerheide is in the Swiss canton of Graubünden, and Graubünden is the largest (in terms of sheer area size) and easternmost canton in Switzerland. The Grisons, as the area is also known, is the country’s only trilingual canton; German, Italian and Romansh are the official languages.

The cultural variety of Graubünden, as well as its geographical variety in terms of terrain, has seen the canton dubbed “Little Switzerland” – such is the way it encompasses so much of what the country as a whole is all about. It is, and we really can’t emphasize this enough, an incredible destination for mountain bikers. The Trails of Bike Kingdom

From easy flow trails that anyone, within reason, should be able to get down without too much trouble to technically demanding trails, where you’ll have to bring your skills and courage to the fore, the Bike Kingdom of Lenzerheide has something for every kind of mountain biker. To help you make sense of the trails, be sure to check out the Bike Kingdom Trail Map and download the Bike Kingdom App.

Using the Bike Kingdom App, with GPS functionality, will help you to find tours and trails to your liking, allow you to benefit from live information on things like weather and what’s currently open / closed, and access relevant news, webcam streams and tips. The app also combines up nicely with Strava, meaning you can record all of your rides at Bike Kingdom Lenzerheide and ultimately become a king or queen of the leaderboards. Time to get extremely competitive with your friends? Sure, why not? 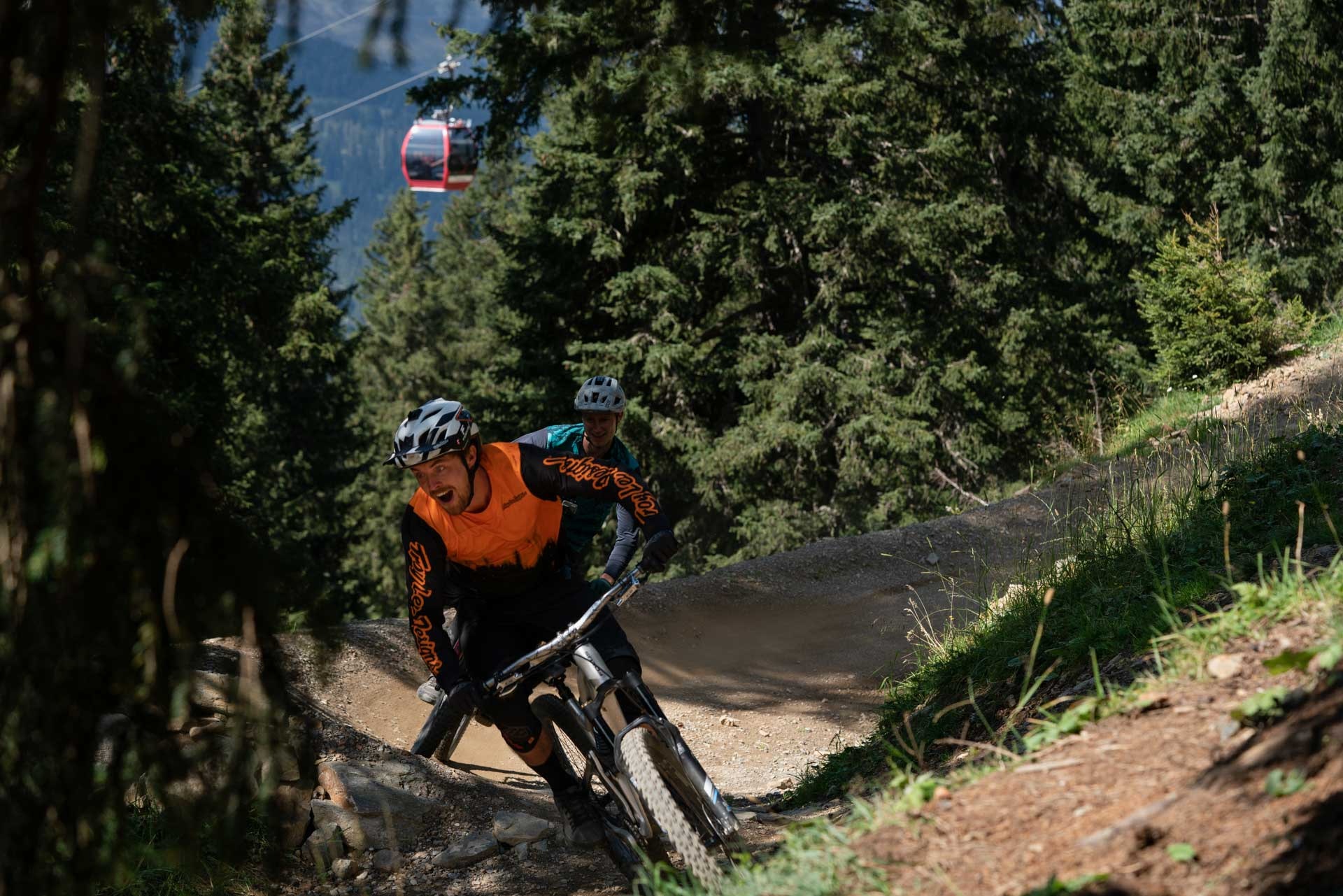 One trail that any good mountain biker worth their salt should consider taking on at Bike Kingdom Lenzerheide is The Great White. There’s no sign of that great big boat-eating shark from Jaws on it, but this spectacular trail does take riders on an adrenaline-inducing ride through some of the Weisshorn’s rocky desert offering. It has the potential to exhilarate and terrify you in equal measure. To get to The Great White, start at the Weisshornspeed Chairlift. From there, this black enduro trail winds its way through rock gardens and will, thanks to its various tables and step downs, invite you to take flying lessons on your bike. Experts, be prepared.

Scalottas Nord is a wonderful, relatively new, addition to Bike King Lenzerheide. It’s a trail section that runs from the June Hut, it has a lovely flowing feel to it and is a relatively easy one to master. It is, the locals will tell you, the perfect start to classics such as the Höhenweg Alp Stätz.

Beginner, intermediate, expert, the embodiment of mountain biking’s professional future; Whatever level you’re at, you’ll find something to get your teeth and tires into round Lenzerheide. 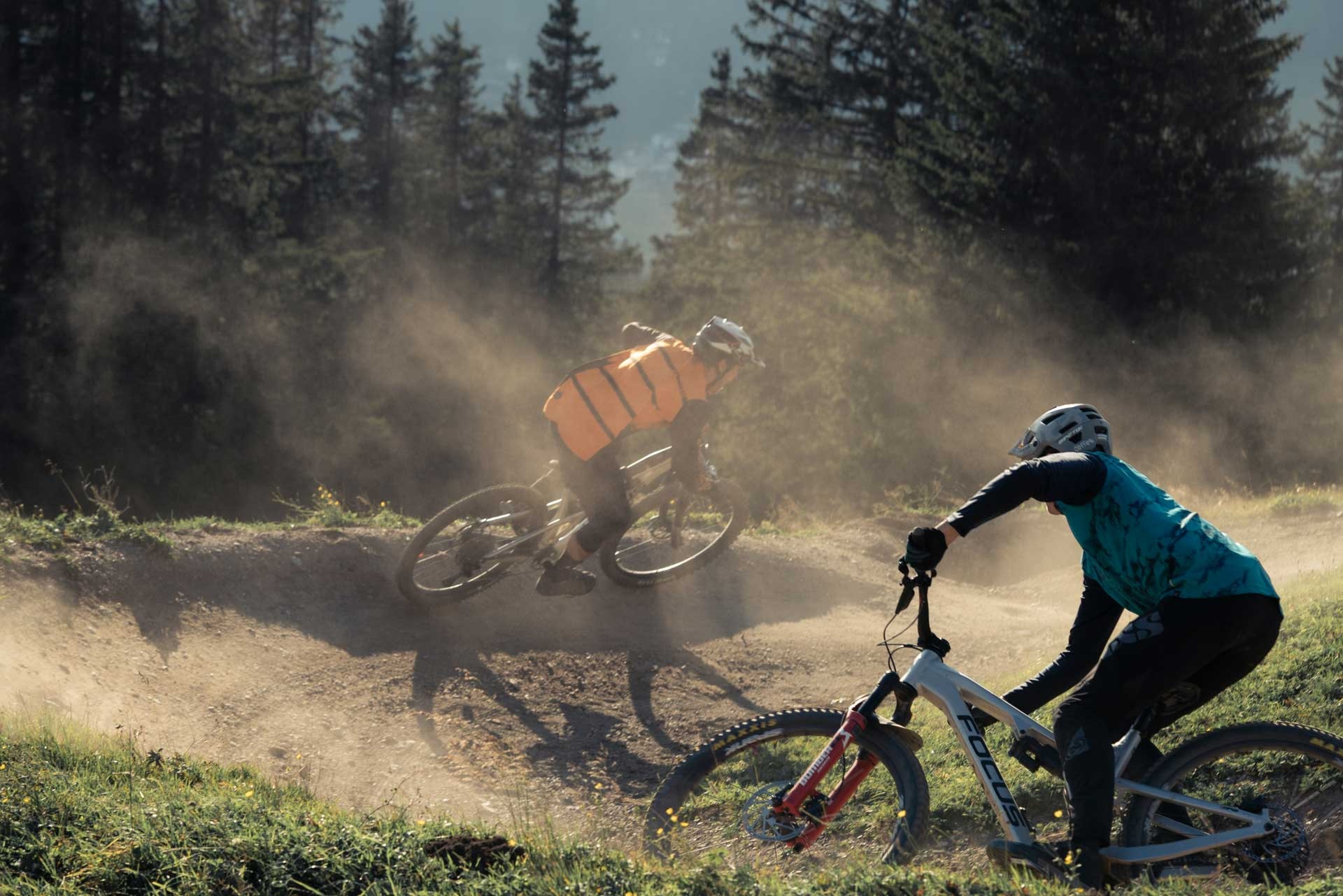 When To Visit Bike Kingdom Lenzerheide

If you’re planning a mountain biking trip to Lenzerheide, you’ll be wanting to come at an optimum time. In terms of maximum riding convenience, there’s a full opening of every lift in these parts from the 2nd of July 2022 onwards.

Do keep in mind that the UCI Mountain Bike World Cup is going down here from the 8th to the 10th of July 2022. During the Mountain Bike World Cup, you won’t be surprised to discover there’ll be a whole bunch of construction and dismantling (that, as well as partial and complete closures of the Bike Kingdom Park). For certain mountain bikers, this period will feel like the optimum time to visit. For others, perhaps less so. Anyway, you know about it now and that’s the main thing.

Bike Kingdom Lenzerheide will be up and running until the latter stages of October 2022. In November, a lot will depend on snow conditions as this is when the seasonal switch from mountain bikes to skis and snowboards, that occurs in these parts every year, tends to take place.

For more information on the best times to go riding in this special corner of Switzerland, check out the full rundown of summer 2022 operating hours for Bike Kingdom Lenzerheide. 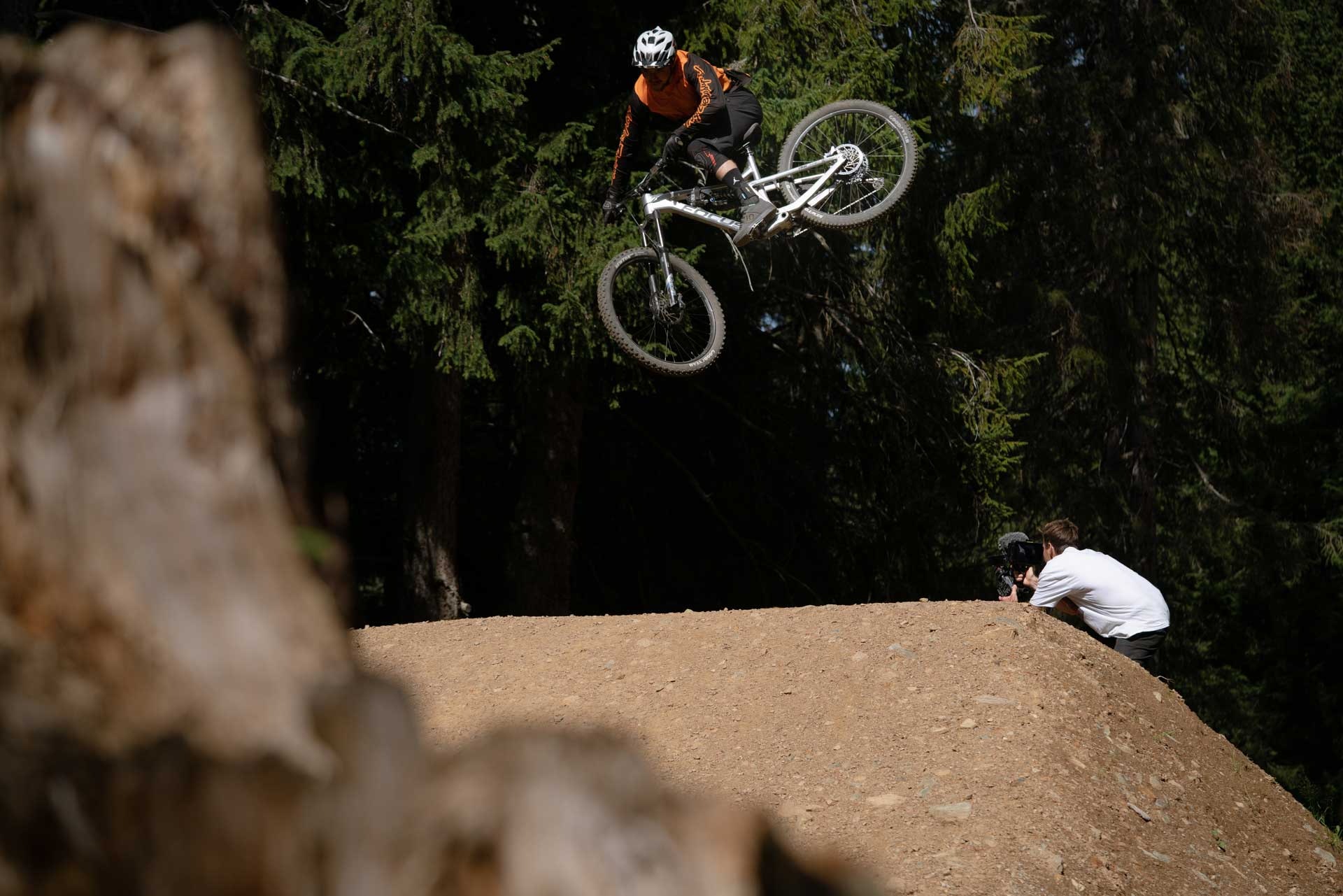 Where To Stay When Riding Bike Kingdom

Whatever your budget, whatever your tastes in terms of luxury and/or roughing it, the list of decent places to stay near the trails of Bike Kingdom Lenzerheide is genuinely quite impressive. Every bike hotel here has a locker room, wash station, knowledge about all the best trails and tours as well as various maps to help you navigate the region.

One of the best hotels in the area is the Hotel Schweizerhof. It’s a mountain sports hotel that brings together the old and new in a way that feels genuinely rejuvenating. Think luxury, think design, think big nature on the doorstep, think a fusing together of modern hotel touches with alpine tradition; yes, think this approach is what’s known, in certain circles at least, as “alpine chic.” Interested? Prices per person, per night, start from CHF 129 (approx £105). 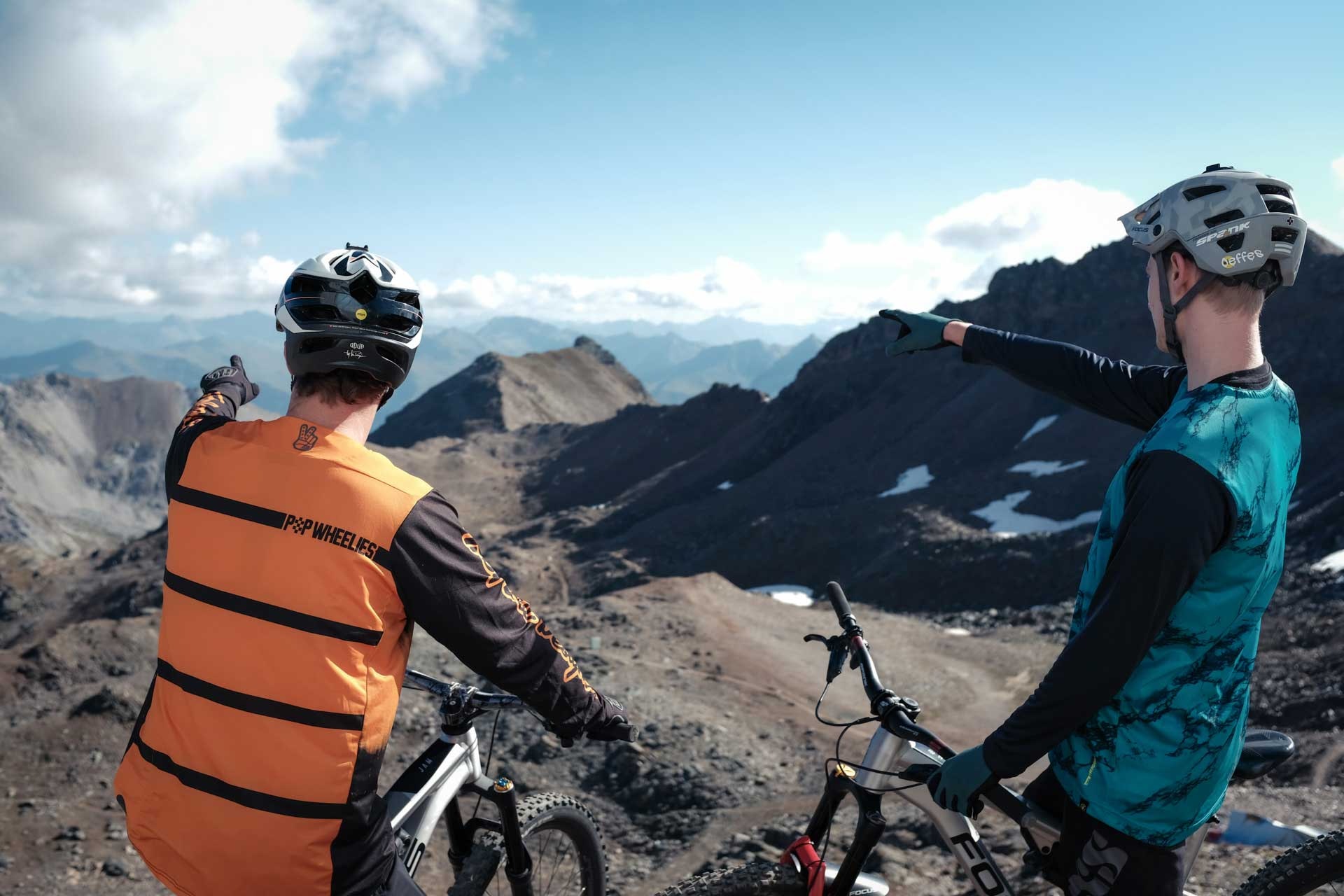 At the other end of the price spectrum, if you’re looking for somewhere pleasant to stay but are on a bit more of a tighter budget, Jugendherberge Valbella-Lenzerheide is well worth considering. It’s a little bit basic, and definitely much more in the hostel bracket, but at CHF 45 (£36) per person per night you’re actually looking at something of a bargain. It’s clean, got great views and could just be the perfect base from which to launch your mountain-based excursions.

For other accommodation options in and around Lenzerheide, have a look at the Bike Hotels section of the Bike Kingdom website. There really is loads of good ones to choose from.

Want to make the most of your time at Bike Kingdom Lenzerheide? It’s easy. Get yourself a guide. Which guide exactly? Well, they don’t come better than Epic Bike so we’d probably start there to be honest. They certainly looked after our team, and then some, when we went out there to film.