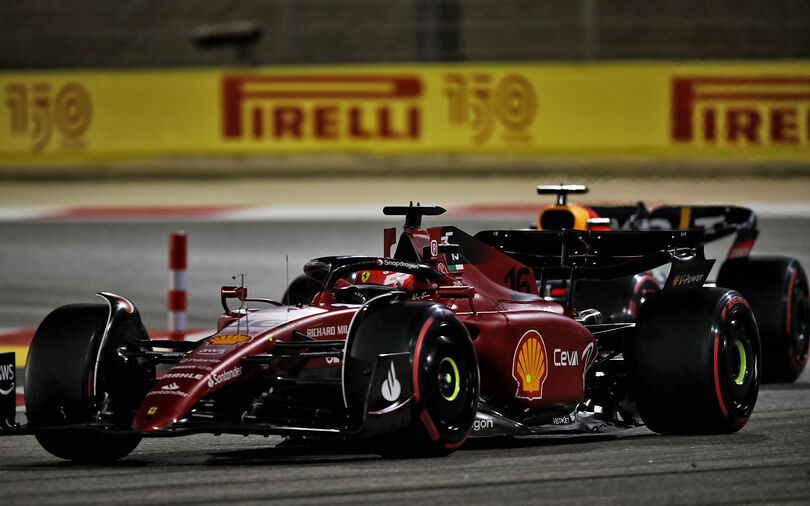 Charles Leclerc won the Bahrain Grand Prix, leading it from start to finish. Though Verstappen was his closest challenger, a late technical retirement allowed Sainz to make it a brilliant 1-2 finish for Ferrari. Lewis Hamilton joins the podium in third place.

Despite the free tire choice, all but McLaren chose to start the race on the soft compound tires. Of the top 10, only pole sitter Leclerc and 7th placed Magnussen had new tires to start with.

When the lights went out, Leclerc had a good start and chose to move over to the right soon to take the inside line to brake for Turn 1. Verstappen duly followed in second place with Sainz in third. Behind the top three, Hamilton immediately charged for 4th and successfully took that position and managed to stay very closet to Sainz in the next few laps.

Magnussen had a great start from 7th and moved up into 5th, only to lose that position to Perez after a mistake on lap 3. Russell then also moved up to 6th after Magnussen made another braking mistake another lap later.

Gasly, Alonso and Ocon completed the top 10. Ocon was later given a 5s penalty for causing a collision with Mick Schumacher.

Albon had a great start into 11th, gaining three places, clearly resulting in him being somewhat out of position as the cars behind seemed to be a lot faster. Tsunoda was the first to make it past the Williams on lap 5.

Rookie Zhou made a terrible start and, dropping down from 15th to 19th on the first lap. However, from that point on, he consistently gained positions again, bringing him just behind Bottas by lap 7. The Finn similarly had a terrible start, losing 8 places, from 6th to 14th before starting a recovery race.

Both McLarens meanwhile struggled badly on their medium tires, them 18th and 20th by leaving lap 8.

In that lap, Perez passed Hamilton for 4th. The Mexican had slowly closed to the gap to the Mercedes and took the advantage in accelleration out of Turn 2.

On lap 11, Hamilton is the first to pit, changing to hard tires. Alonso switched to new mediums, just like Mick Schumacher, all on the same lap. All struggled with tire warmup though as tire blankets are now limited to 70°C, making it more difficult to go fast straight out of the box.

Two laps later, Verstappen and Sainz pit simultaneously, both taking on a new set of soft tires. The next lap, Leclerc, Perez and Russell pitted just as Verstappen recorded lightning quick second and third sectors. When Leclerc came out on track it was only with the tiniest of margins that he was able to hold on to the race lead.

Positions remained fairly fixed from that point on at the front, at least until the second series of stops. Those were triggered by Alonso after he had created a flat spot right about the same time as Verstappen had done so. Hamilton followed suit on lap 27, switching from hard to new mediums. The Mercedes driver returned to the track in 8th while being asked not to push the tire too hard on the out-lap.

The leaders pitted in the next few laps with Leclerc enjoying a slightly bigger margin when coming back out thanks to a 0.5s quicker stop by the Ferrari crew compared to what Red Bull did one lap earlier. As Verstappen complained he could’ve easily made it in front if he pushed more on the out-lap, his race engineer replied one lap later “You are free to push”. The gap on lap 35 was 1.9s.

When Sainz and Perez then pitted simultaneously, they ended up 2.2s apart from one another, both 15s behind Verstappen.

As Verstappen and Perez slowly lost ground to both Ferraris, Red Bull pitted both their cars on lap 42, switching them both to used softs. Despite a scare for Verstappen with doubts about the front wheel fixture, all seemed fine and the Dutchman went on to set the fastest lap on his first pass on the main straight.

Sainz was then also pitted to react on Perez’s stop, but when Gasly stopped out on track with his AlphaTauri on fire, everybody took the opportunity to take a final stop under the Virtual Safety Car period. That VSC was soon converted to a real safety car, bringing the pack together.

With all drivers on softs, the top 10 positions behind the SC were LEC, VER, SAI, PER, HAM, RUS, MAG, BOT, OCO, MSC. With 6 laps to go, the race was on again. Leclerc immediately set the fastest lap as Verstappen was busy defending his position to Carlos Sainz, despite again coming halfway aside Leclerc just ahead of the restart.

Two laps later, Verstappen shouted over the radio about a battery problem on the back straight, leaving Sainz to breeze past into second place. But it got worse, as three corners later, Max asked his race engineer “what did you do?” when he seemingly lost all drive, forcing him to drive into the pits and retire the car. A far cry from fighting for the win.

When DRS got enabled, Hamilton charged for third until Perez spun in Turn 1 of the ultimate lap, supposedly also with a technical problem on the engine. The Mexican was unable to get going, resulting in a point-less race for Red Bull Racing.

Leclerc on the other hand led Ferrari to a brilliant 1-2 victory, ahead of both Mercedes. Kevin Magnussen finished 5th and Bottas 6th after an impressive recovery following a dismal start.

The scene is set for a great season!