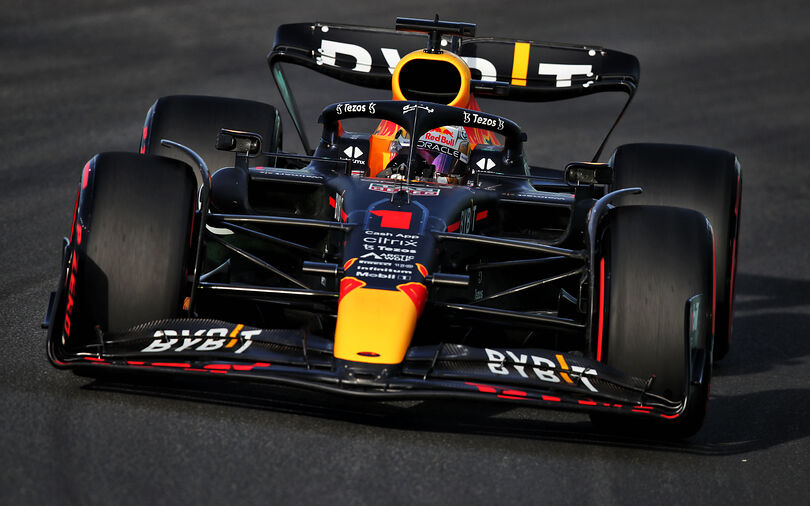 Max Verstappen has won the Saudi Arabian Grand Prix following a very close battle with Ferrari’s Charles Lerclec. It was only 4 laps from the end that Verstappen got the upper hand, Ferrari to take second and third leaving on the podium as Sainz finished third.

The Saudi Arabian Grand Prix was the first ever to start with Sergio Perez on pole position. Just like him, all top 10 starters opted to use brand new mediums for the first stint, contrary to Magnussen who was on used hard tires at the start. Hamilton and Hulkenberg were the only two to join him in that decision, with all others opting for medium, either new of used.

When the lights went out, Sergio Perez made a great start and easily maintained the lead. Leclerc followed closely in second as Verstappen managed to take third from Sainz through the first few corners. Ocon, Russell, Alonso, Bottas maintained position while Magnussen gained two, from 11th to 9th. Norris completed the top 10.

Tsunoda suffered an issue already before the start and didn’t manage to partake in the race. Zhou on the other hand did, but he had a troubled start and seemed to lose all drive in Turn 1 and 2 before getting back up to speed. The Chinese reported “same issue as last week”.

As the front four run away, both Alpines got involved in a close battle. Alonso was first blocked in the inside of the pit straight, nearly causing a collision. The next lap the pass worked, but Ocon returned the favor the next lap, only to miss Turn 1 and return the position half a lap later. That switch was almost an opportunity for Bottas while Magnussen also joined up from behind, resulting in a close pack of 4 cars, all together losing 1s a lap to Russell in 5th.

After making another attempt to pass Alonso and go wide on T1, Ocon then lost positions to Bottas and Magnussen. That dropped him to 9th as Hamilton steadily made progress to 10th position.

Moments after that stop, Latifi found himself in the wall, leaving himself wondering “omg, what happened there?”. The virtual safety car period, and then the real SC the triggered nearly everybody to pit immediately. That was obviously a bad affair for Perez as he found himself in third, behind Leclerc and Verstappen.

Magnussen and Hamilton (just like Hulkenberg) did not pit and retained their hard tires they started on, bringing them up into the 6th and 7th, ahead of Alonso, Hulkenberg and Bottas. Ocon ended up 11th behind the safety car, followed by the McLarens of Ricciardo and Norris, then Gasly, Zhou, Stroll and Albon.

On lap 22, the race restarted with Leclerc maintaining the lead over a challenging Verstappen. Sainz on the other hand quickly got past Perez to move up into third place. What followed was never ending string of the fastest laps of the front two runners once Leclerc managed to get out of Verstappen’s DRS range.

Hamilton moved up another spot after some passes and re-passes with Kevin Magnussen, putting him 6th and 6 seconds behind his team mate little after the halfway mark of the race.

Alonso in 8th wasn’t able to follow the Mercedes and was repeatedly challenged by Bottas in those laps, though without a lot of success for the Finn. From lap 31 things seemed to improve for the Alpine driver as he broke free of Bottas and managed to get past Magnusen. It didn’t last very long though as Alonso saw Magnussen re-pass him half a lap later as he lost power and began a slow lap to retire from the race.

Zhou on the other hand had to serve a drive-through penalty for incorrectly serving his previous 5-second penalty incurred at the start. It appeared not to be an error of the rookie though as the team had put hands on the tires while Zhou was supposed to serve the 5s penalty at his pitstop. No mechanic is supposed to touch the car during such a period.

As Alonso returned to the pits and stopped at pit entry, Ricciardo rolled to a halt as well, just 100m behind Alonso, also with a technical issue. Bottas on the other hand made it in, but only to be reversed into the box and retire from the race as well.

As a virtual safety car period was initiated and the pitlane closed, marshalls entered the track to push Ricciardo’s McLaren and Alonso’s Alpine into the pitlane and away from danger.

As Magnussen and Hulkenberg pitted to change to mediums while the pitlane was still open, Hamilton did not, sending him into a discussion with his team to question if they are still ok with their strategy. When the track went green again with 10 laps to go, Hamilton eventually pitted to change to new mediums but he of course lost out, dropping behind Magnussen.

In front, Verstappen was very very close to Leclerc, crossing the finish line of lap 40 at 0.355s. On the run to the final corner, Verstappen made it past to take first place, but Leclerc than returned the favor on the pit straight to get back in the lead.

Next time they ended up in the penultimate corner, Verstappen locked up all wheels and Leclerc briefly also the fronts, enabling the Ferrari to get into the corner first and, but not far enough to break DRS. The following laps were very very close with Verstappen taking the lead again on lap 47.

This time, the pass was on the main straight, making it more difficult to stage a comeback, especially given the higher top speed of the Red Bull. So, despite staying within a second of Verstappen, Leclerc finished second as Sainz made it to third place, recording another strong double podium for the Scuderia.

Note – Leclerc scored an additional point for setting the fastest lap of the race.