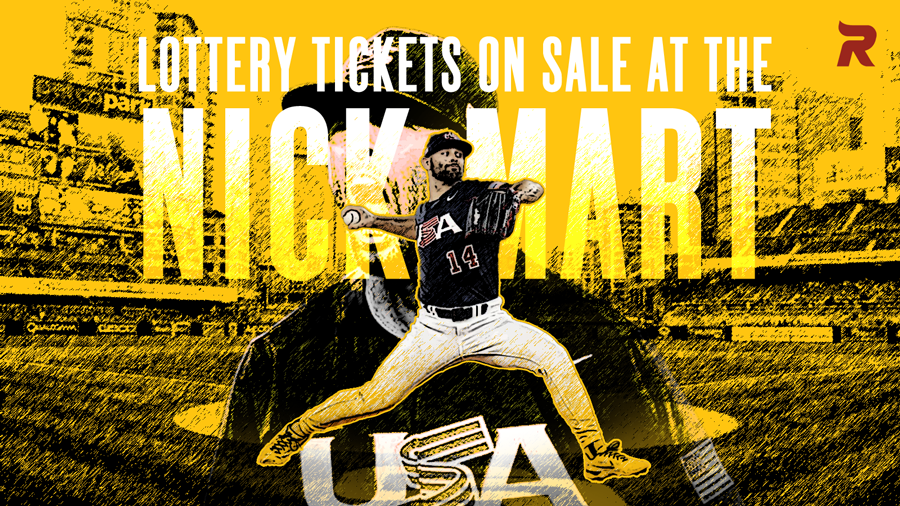 Scenario: It’s past round 38 in your deep draft league and you’re scraping the barrel for some cheap pitching. You scroll past the list of names time has forgotten decidedly less inspiring than a bologna sandwich, until, you come across Nick Martinez. Spotlight, enter stage right. He was originally drafted by the Rangers back in 2011 but did not have a very successful first run in the majors aside from serving fan-attended BP. After going to Japan and this last year posting a career-best mark in all categories, Nick has found a new lease on MLB-life, earning himself a 4-year (3 player options) deal with the Padres and an opportunity at pulling a rotation spot from Paddack. The Padres clearly saw something they liked.

So what did the dads see in him? Well, see for yourself. Above (omitted seasons of less than 100 IP) you see this last year in Japan, he found another gear. The metrics are night and day different, but, the key to it all starts with his increase in average fastball velocity to a career-best of 93.8 mph. Zoinks! That’s right in the 93-94 wheelhouse of when velocity starts to make a difference for pitchers. You remember what it did for Jake Odorizzi back in 2019? Along with textbook tunneling via high-zone fastballs, it gave him the separation he needed with his split-change to increase his SwStr% and get more Ks; I wrote about it extensively here. Maybe Nick is following the same path…

Bob Melvin was asked what he makes of Nick Martinez based on what he’s seen from his time in MLB to what he can do now: pic.twitter.com/6FJnA06baH

Listening to Bob Melvin talk about him, it sounds like he’s cut down on his pitch mix to focus on what he does well. The bump up in velocity can definitely help give one the confidence to do just that. If you trust your stuff more, you feel less like you need to “hide” pitches. My guess is that Nick is doing just that, especially in regards to his fastball. If he trusts his fastball more, as we saw in the 2020 Olympics, that leads to him trusting his changeup more as well. Confidence in a pitch pairing, along with good location, is a big deal (duh).

Let’s refer back to those NPB numbers…

After a lost 2019 due to a forearm strain injury, Martinez came back in 2020 with some moderately improved velocity and was able to up his strikeout rate albeit with less command as his BB% also increased. The season wasn’t as glamorous as one would hope but the seed was planted. After making the USA Baseball team for the 2020 Olympics in Tokyo, a new pitcher was on display as he mowed down the South Korean team in the semifinals (5.0 IP, 4 H, 1 ER, 0 BB, 9 K) and then again in the gold medal game vs Team Japan and what was essentially the NPB All-Star team, filled with the best players that Nick had been competing against during the season, and he rose to meet the challenge (6 IP, 5H, 1 ER, 1 BB, 7 K) despite Team USA coming up short to finish with Silver.

He displayed command, deception, and a strong bite on his changeup against a lineup full of NPB’s best that were already familiar with him. Other than the velocity jump, what changed for Nick Martinez? As Melvin indicated, he threw a lot of pitches before, and sounds like he’s simplified his pitch mix. That improvement carried over throughout the 2021 season as he was a reliable starter going 6 IP in 20 of his 21 starts. He was durable and effective; whatever he had changed was working. Let’s review the data that we have…

In his 4-year MLB career prior, Nick Martinez featured a 4-Seam Fastball, Slider, Sinker, Curveball, and Changeup. The chart says he altered the slider to more of a cutter in 2017, and after watching some film of the 2020 Tokyo Gold Medal game I’d say he still throws both while leaning more on the slider with vertical drop. After his long recovery from the injury, Nick altered his changeup grip from a more traditional changeup to the Vulcan grip and coupled with his newfound velocity has been able to create more separation between the 2 enhancing its effectiveness.

What used to be a 92/86 is now 94/82, a difference from 6 to 12 mph and effectively doubling the gap between those pitches. The velo gains he made either by adding muscle or refining his delivery (or both) paved the way for his re-gripped changeup. Then there’s his pitch mix. From what I saw he has all be scrapped his Sinker and uses it very sparingly (only saw it twice by my count). With the velo gain, his 4-Seamer has returned to being his primary pitch and building block for sequencing up closer to a 50% usage range. Next, I saw him use the Slider and Vulcan roughly equally at around a 20% clip and then the last 10% was a mix of his Cutter and Curveball.

He shoved in his start for Team USA tonight!

And lastly, his command. He looked to command the zone as he worked fast through his set and windup, hardly ever taking more than 5-10 sec to deliver a pitch. Likely the tightened-up mechanics have also helped him establish more control over his pitch location. Specifically, he was not shy to use the fastball up in the zone paired with the unlike slider and change down in the zone, not Odorizzi. He also made a point to work outside and away to get a chase when the situation needed it. He was quick and efficient.

So what can we expect to see from the new him stateside? Though he established himself as a strikeout pitcher in the Olympics I can see him having to rely more on defense when he faces batters more acquainted with facing velocity. This will probably result in some more hits and lower K/9 probably in the 8.5-9 range and likely a modest 1.20 WHIP is an outcome with possible upside in the 1.14 range. I believe he will continue to limit walks and has a decent chance at maintaining a sub-4.00 ERA if he’s able to keep hitters off-balance like he did in Japan. With a current ADP past 400 it’s hard to argue with the discount right now until people catch up to him after a few Spring starts.

I suspect that he’ll soon shoot up draft boards 80+ picks once he shows some more consistency than Paddack. Paddack is still a binary pitcher while Nick now offers 4 effective pieces and a serviceable curve. And because of this, I believe by the end of Spring training Nick Martinez will earn the 5th spot in the rotation. Grab that discount now in deep drafts, and in 12 teams or fewer bookmark him for later as a replacement or stream target in favorable matchups (not the Dodgers).

If you want more Coolwhip to top off your baseball experience, fantasy or otherwise, you can follow me on Twitter: @CoolwhipRB.