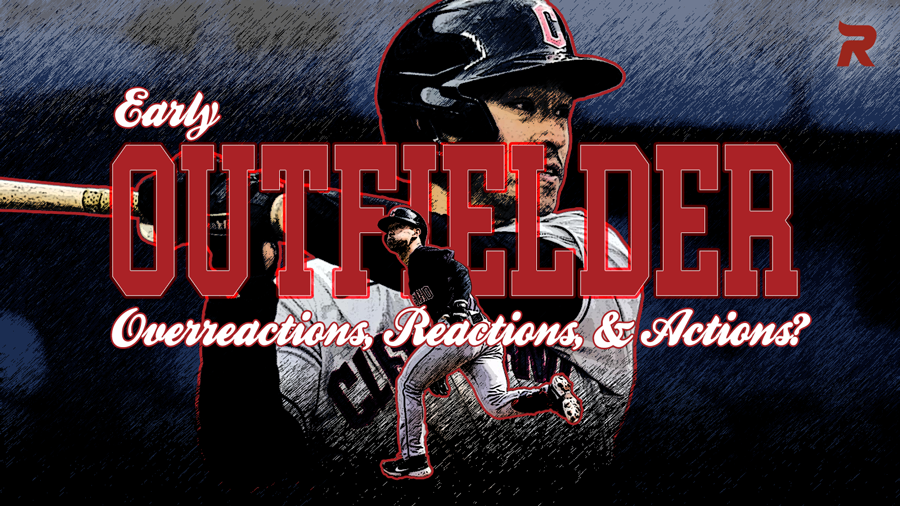 Okay, Razzers, one more outfield post to start the year while I get my footing. I’ll be back to the deep-diving next week after we get a full week plus of games to digest and I can process pitchers with at least 2 starts under their belt and more than 4.2 inning starts. So why not digest some early overreactions on outfielders! It’s all the rage right now. Let’s talk about a few.

The hot topic around town is not a boutique for people with daddy issues but none other than early season heartthrob Steven Kwan. Prospect Itch had plenty to say about him in the preseason, even going so far as to predict at .295+ average in his Brash Predictions. Gray too gave you plenty of reasons to draft him 0ver a lot of other boring people late in the draft as early as December. And he has not disappointed. Yes, he looks great and he’s got some staying power at the top of the CLE lineup, but the book on him is still being written. However, I like what I see, and I think he’ll be able to adapt, here’s why…

Steven Kwan reached base 15 times in our 4-game series against the Royals, the most times in a player’s first 4 career games since at least 1901.

Look at the way his hands fight through those high fastballs. It’s a beautiful piece of hitting. Bryan Reynolds’ rookie season on repeat could be in the cards. I don’t know how much of his newfound power will transfer to the majors, but the contact skills are there. So far he’s hitting a cool .800 through 4 games and we’re already expecting him to beat Joe DiMaggio’s and Ted Williams’ record in the same season. Whoa whoa, let’s ease up on the knighting ceremony just yet but he does deserve a ranking bump.

Another Joe, Jo Adel, was the most dropped player in Yahoo leagues this weekend. I saw this on the transaction page of my home league. Wild at all the panic drops for a top prospect just 1 series into the season, so many overreactions. Guys, no projections and no analyst (including myself) I know expects Adell to hit .280+ this season, so why is everyone panicking when he goes 0-for in the first series of the year. Chill out. He’s not expected to be a big average guy and that should have been priced into your draft board when you took him. He’ll have ups and downs and hot/cold stretches, roll with it…

And just like that, last night Adell goes 2-4 HR, RBI double. Right! The season just started. I think on every team I drafted Adell I also have guys like Suzuki to balance out the average. The one thing that has me a little concerned is Joe Maddon dishing out his playing time. Something to watch, especially when Ward comes back. For now, I’m going to be moving him down a few places on the rankings because of PT. Until Maddon takes off the training wheels you should probably have a backup OF to rotate in on days he doesn’t play.

Speaking of Seiya Suzuki, he’s off to a great start huh? He’s displayed the power, patience, hand speed, the whole bit. New here? Yeah, I kinda like him a lot, deep dive here. The only thing we haven’t seen from him yet is his speed. Which, might not materialize for a bit until he gets a feel for MLB pitchers; And even then, it might not be a lot as he didn’t have a very high success rate in Japan. But the bat is real, and it’s spectacular…

Here is Seiya’s homerun, obviously even good pitchers like Peralta will get donged middle-middle:

His first @MLB home run has not. pic.twitter.com/J1JxctAWj0

The thing about Seiya is that, over the first series he didn’t face garbage pitchers. He faced some of the best. Burnes, Woodruff, Peralta. Early season rust, sure. But all three are top 20 pitchers and each was drafted (or should have been) in the first 5 rounds of fantasy drafts. He finished the series 3/8 with 3 BB, HR, 6 RBI. Is that good? How good can he be versus mediocre pitching? In their division alone… Reds beyond Mahle-Castillo? Cardinals beyond Wainright? All of the Pirates starters? Yeah, I think he’s going to have plenty of opportunities. He’s basically 1 stolen base away from me moving him up into my Tier 1 OFs. He’s going to mash.

Mash? Did I mention Brandon Marsh yet? Last night he blasted a 3-run homerun followed by an RBI double later giving him a 4-RBI night. That’s nice. Before the season started I thought he would start primarily against RHP but with Ward out he’s been playing every day due to his defensive prowess. He’s also a great contact hitter and ha’s started the year hitting .400; I mean, he’s no Steven Kwan, but he’s got some promise. He and Adell were the sole run producers on a night that had Mike Trout out with a tummy ache. This is what winners look like:

The heroes of the night pic.twitter.com/xF7vA4Rshq

Are those outfielders or stars of the next buddy-cop comedy? We can call it SoCaliente, tag line: “Southern California is hot, but they are hotter.” Or something like that. Anyway, Marsh is off to a hot start and is playing, he should be rostered in most leagues. The Angels lineup is just warming up and once Ohtani and Trout start mashing, Marsh and the others will profit too.

We can’t talk about profit without mentioning Bux! Byron Buxton is at it again. Last year he started out hot just like now and then had his usual momentum-killing injury that derailed his season. Can’t we have anything nice? Bux has already hit 3 HR and is making his case for MVP. In case you didn’t realize how hot he is watch these:

Top video: High fastball (101 mph mind you) crushed into the third deck. Yeah that’s no small task. And if that’s not enough for you we have his 3rd HR right here. Bottom video: Subtext, when everything is going your way. Jammed inside with an offspeed pitch and still muscles it out over the fence with his hands. And he got his first SB standing up to boot. April is going to be quite the month for him. I’ll probably need to move him up in short order. I really hope we get to see what a 140+ game season from him looks like. What do you think, if he and Acuna both play 140 games, who becomes the #1 outfielder? Let me know in the comments below.

Connor Joe now has 2 HR and hit .313 while, mind you, moved up to leadoff for the last 2 games. What the Rockies is going on here? That’s 2 more HR that 180 million dollar man Kris Bryant has. Hitting Coors is hard to argue with, and if he’s out there in your league it might be worth grab.

Brad Miller is doing his Brad Miller thing again. It seems every year he has 1 insane month that propels him to finish the year with 20 HR no matter how many total games he ends up playing. In RazzChat at the beginning of the season I predicted that May would be Miller Time, but could be coming early. It might not be a bad idea to give him a go right now and see if he stays hot. Check the schedule and be ready to pounce if the Rangers face RHP.

Jurickson Profar is not that far removed from back-to-back 20 HR seasons. And with improvements to his plate discipline since coming to San Diego, he might have just needed consistent playing time. This year could be that as he settles into an everyday job manning LF due to roster depth now that Tommy Pham is gone and Tatis is out for an extended time. Even in the short 2020 season he was pacing for 20 HR like before, but the power was off last year… Playing through injury? Lack of focus? Who knows. He could be back, so stay tuned.

Ian Happ is hitting? baseballs??? It’s one series but maybe he found his stroke again after taking 2/3 of a season off. Am I back in?

Myles Straw Already has 2 SB and 4 hits through 4 games… I was kinda down on him to start the year and funny that I’m already preparing myself to eat crow on him. I mean, after those 4 games versus the Royals sad hitting he’s only hitting .235 so he’s not exactly tearing the cover off the ball… but does it matter? Another 30 SB season is worth its weight in gold, sure he could still lose ABs if he struggles… but what if he doesn’t?

If you want more Coolwhip to top off your baseball experience, fantasy or otherwise, you can follow me on Twitter: @CoolwhipRB.