Welcome my good and decent Razzball Commenter League managers. How were your first four days of fun? Oh, you drafted a team full of White Sox did you? Ouch, Yoan Moncada, Lance Lynn and Lucas Giolito too? Welp, there’s always next year (Sorry Keelin!)! I kid, I kid, the RCL format is actually one of the easier formats to recover from these types of things. Just pony up to the Hitter-Tron and make due with batty calls for the next few weeks, you’ll be OK. This Razzball Commenter League update will be a little different than most. Throughout the year I’ll be bringing you stats, trades, weekly leaders and overall standings. With only four days worth of data it’s really not worth diving into. Our RCL bots are not up and running yet, so there’s not much to look at right now. I have gone through each league and I can report on the teams with the highest total scores so far. That should wet our appetite for next week. Also this week, I’ll be giving you a couple of FanTrax tips I’ve found helpful for setting up your team page, go over a few trades from the past week, give you the final draft numbers and let you peak in on the ‘Perts League.’ So, let’s get down to business, shall we? We shall!

First things first, I want to give you a rundown of how I set my team settings to be more like other leagues I play in and/or just make life easier by reducing clicks. You might not find all of these useful, but even just knowing where to go to change these settings is handy in case you stumble upon something else. Also, if you have found any handy settings that I missed, please share. Likewise, if you have some FanTrax gripes, I’m happy to pass those on to my contacts at FanTrax. They are typically pretty responsive to site feedback.

The very first thing I do with my team page is set it up so I’m not looking at YTD stats. Maybe you’re into that, but I prefer to see today’s stats when I go to my team. I’ll click on a player to see their overall stats if I need to. To do this is pretty easy and brings us to a very handy spot on the FanTrax page. If you go hover over “TEAM” you’ll see a “My Team Settings” section, click on that and you’ll be taken to a page with very few settings. However, clicking on “General” brings you to a page full of options…maybe too many. The setting we’re interested in here is under “TEAM ROSTER”. Find the section for “Default timeframe” and change that to “Period”. Period is the section of scoring for your league. If you’re in a weekly league, each period is one week, for the RCLs, each period is one day.

This section contains a lot of things that will make your navigation easier and result in less clicks. For example, clicking the slider bar for “Automatically submit lineups” will make it so you don’t have to hit that little “SUBMIT” button after every lineup change. I also unclicked the bar for “Show first unlocked lineup period by default”. This annoyed me that late at night when I wanted to check on my team it would switch to tomorrow’s period and I would have to click back. Just a personal preference.

If you scroll down to the “Players Screen” section you can change the number of players shown on the players screen to 50, 100, or 200 instead of 20. This reduces a lot of clicking through pages and I’ve gone with 50 myself .

Next, we can adjust our notification settings. Once again, maneuver up to “TEAM” and right under “My Team Settings” you’ll see “My Notification Settings”. FanTrax seems to default everything to push notifications…except for letting you know about players heading to waivers. THAT it seems to think you need an email about. In the RCLs, this may cause your inbox to implode, so you probably want to turn that one off. If you do want to know about trades, message board posts or trade block changes in the league, this is where you come to be alerted of those things. Adjust to suit and everything should auto save.

DRAFTS BY THE NUMBERS

Our RCL ADP Sheet is all completed. Feel free to open that up and peruse the numbers as you read along. Here are some highlights from Draft SZN:

The RCL Bots are far from being ready to pul RCL data, but I did comb through all the scoring leagues to find the highest teams after four days of play and here they are:

It’s always nice to get out to a hot start, but I’m not victory lapping have two teams on this list just yet. Bartolo Colon’s ADP is one of the best team names I’ve seen in some time, well played. Congrats to Vin and Grimey for their hot start too! Check in next week when all our ERAs implode!

Each week we’ll peek in at our resident ‘perts to see who is laying claim to best “expert” RCLer in the land. We’ll take notes, check the standings and generally stalk them. The heading is also hyperlink, so feel free to follow along as we go.

I covered a lot of draft info in my last few pre-season RCL posts, but one thing I didn’t do was run the draft numbers for the ‘Perts League. We drafted late in the draft season and this is the first chance I have to recap it. Right after the draft I took the draft results of the league and ran the projections for each team based on a) Gray’s projections and b) Rudy’s Point shares. The results and the corresponding roto standings can be seen below:

Grain of salt time! Obviously, these numbers don’t take a lot of factors into account. RCLs are all about in-season management, this exercise is just for fun. If someone drafted 3 bench hitters, these numbers will have offensive values. CA James got autodrafted 37 starting pitchers, so obviously, their numbers are skewed. Again, this is all for S’s and G’s. That said, It’s JKJ, Coolwhip, and me taking top three honors no matter how you slice it. I’d be very happy with that, Gray on the other hand might be less impressed. Streaming and in-season management will play a huge role here. It does look like Crammy has his work cut out for him. It will be fun to check back in at the end of the season and see how these numbers did in predicting our eventual league winner. Last year the numbers had Son finishing first by Gray’s numbers and third by Rudy’s and he finished second to Laura, so not too shabby.

As for the first little bit of season, well, Coolwhip, JKJ and I are all in the top four with a little Malamoney sprinkled in there: 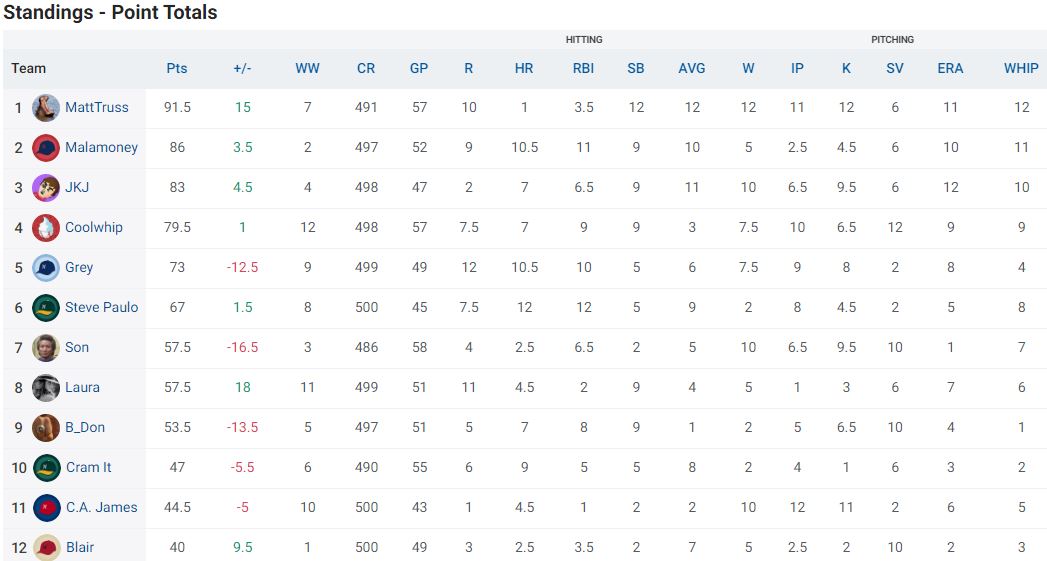 All the trades that have gone down in the past week. Public ridic is not only allowed, but encouraged.

We’ve had eleven trades so far in the RCL preseason. Good for everyone who managed to offload Robert Suarez before his value went in the tank. I was so close to a deal shipping Blake Treinen away but couldn’t get it done. This is why stashing closers is so much fun. That trade in RCL #4…woof.