What transpired this preseason: Coolwhip reached out to me to see if I was going to write a Nestor Cortes sleeper, because he liked him and wanted to write one. I said, “Nah, I don’t think I’m going to write one, but I like him too!” What Coolwhip didn’t know, what no one could’ve known, I hadn’t looked at Nestor Cortes at all. I said I liked him because Coolwhip said he liked him. Then I waited for Coolwhip to give us his Nestor Cortes sleeper, and, after he did, I said, “Yeah, exactly, that’s what I would’ve written too!” Stats and image provided by Coolwhip: 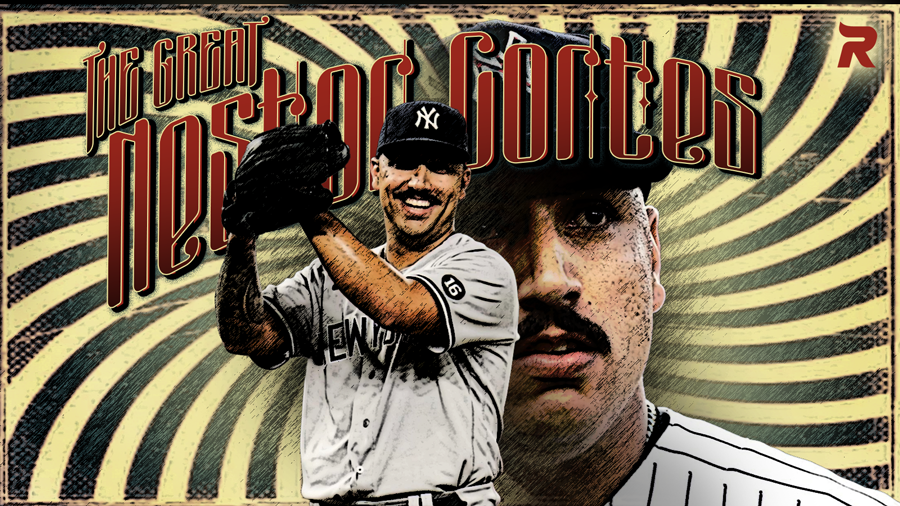 “(M)ain thing to note is in 2021 Nestor started 14 games. Before that, he had only started a grand total of… (carry the 1… multiply by square root…) 2 games. 2 games, that’s it. So this was a bit of a new foray for him. It’s not often that you go from the pen to starting and your numbers improve drastically. Not just a little mind you; but by every conceivable measure, he got better. His K-rate went up, BB-rate went down, and he cut home runs in half while suppressing hard contact and limiting runners.”

Nestor did this by scrapping the sinker and curve, and replacing them with a cutter. Also, he varies his release point a lot, like nearly every pitch. I half expect him to throw right-handed occasionally. Yesterday, Nestor Cortes (5 IP, 0 ER, 4 baserunners, 12 Ks, ERA at 0.00) threw an immaculate 4th inning, and changed his release on nearly every pitch. This is magic:

In 9 1/3 IP this year, Nestor Cortes has 17 Ks. That’s in two starts, or one Nolan Ryan start. Pardon me while I put my eyes back in my head. Nestor Cortes’s 16.4 K/9, 0.96 BB/9 and -0.26 FIP is pretty good, if you’re lacking for adjectives. You really have to be impressed with Nestor so far this year, he’s looking as brilliant as me blindly agreeing with Coolwhip. Anyway, here’s what else I saw yesterday in fantasy baseball:

Bruce Zimmermann – 5 IP, 0 ER, 6 baserunners, 6 Ks, ERA at 0.00. Fun fact! Bruce Zimmermann is on Jakob Dylan’s fantasy team that he named Daddy’s Love. As for Zimmermann, even if the Streamonator liked a matchup of his, I’m not sure I could start him.

Javier Baez Hit the IL with thumb soreness. So, that’s where thumbkin is!

Matt Manning Sounds headed to the IL with shoulder discomfort. Damn, it was because I picked him up to stream, wasn’t it? That leaves only me to blame, ’cause Ma-Ma tried, Ma-Ma tried.

Casey Mize Diagnosed with a medial collateral ligament sprain in his elbow. It sounds not great, ie Sir Mize could be out a while.

Daz Cameron – Was called up, as predicted here three days ago. Just told you to grab him in Friday’s Buy, and today I’m telling you why. He is very similar to his daddy — 20/20/.220 incoming? Daz queen! Will he keep a job after Grossman returns? Naz queen. Yikes, Naz queen sounds like some Leni Riefenstahl garbage.

Thairo Estrada – 2-for-4, 2 runs, 4 RBIs and his 2nd homer. Giants have roughly 15 hitters for nine spots, and even if some of them received everyday playing time their stats wouldn’t get markedly better. Somehow they have 15 guys who would give you 15-18 HRs and .270 in 300 ABs or 600 ABs. Alas, for you, I will monocle Thairo.

Patrick Corbin – 5 1/3 IP, 2 ER, 6 baserunners, 4 Ks, ERA at 7.50. This start was vs. the Pirates, who were benching their top bats, which is just an inherently funny thing to say. Streamonator thinks Corbin’s next start is equally funny but this time laughing at him.

Hyun-Jin Ryu – 4 IP, 5 ER, ERA at 13.50, and hit the IL with forearm inflammation. Same, but my injury came from not being able to drop Ryu quick enough.

Carlos Carrasco – 5 IP, 0 ER, 5 baserunners, 8 Ks, ERA at 0.84. Said this last week and on the podcast (I believe — hey, I say a lot of shizz here), but the Mets will have one ace this year. Who it will be might come down to who stays healthy. So far, Carrasco’s looked as good as any.

Ian Anderson – 5 2/3 IP, 1 ER, 3 baserunners, 7 Ks, ERA at 6.48. Thankfully, he bounced back. Partially for Anderson, but more importantly for me. Now I don’t have to field a shizzton of “Should I drop Ian Anderson” questions.

Marcell Ozuna 1-for-4 and his 4th homer, hitting .318. Hopefully, if Ozuna leads the majors this year, it’s not a feel-good story, because, if it is, things have gotten really bad.

Sonny Gray – Left Saturday’s game with hamstring tightness. Welcome to my Ted Talk, where I address God and discuss why hamstrings should be looser. By the way, how embarrassing would it be if I did a Ted Talk for just God and he no-showed? Brutal L.

Tanner Huck – 5 2/3 IP, 0 ER, 5 baserunners, 4 Ks, ERA at 3.00. Why does it feel like everyone I told you to draft, and wrote sleeper posts about, are guys you want to abandon literally after one start?

Nick Senzel Hit the IL without a designation. Ooh, so mysterious. I wonder what he’s got. Does it rhyme with Movid?

Julio Urias – 5 IP, 0 ER, 2 baserunners, 5 Ks, ERA at 3.86, and regained some of that lost velocity from his first start. If there’s no underlying injury, I imagine we’ll start to see a lot of velocity regained as weather heats up and pitchers are more up to speed, literally.

Taylor Ward – 1-for-3, 1 run as he hit third. Half the time that Joe Maddon is managing I think he’s doing a bit. Yesterday’s bit? I don’t know, maybe he thinks it’s funny to confuse people with Taylor Ward and Tyler Ward (2-for-3, 1 run, 1 RBI and his 2nd steal). If the Angels promote two more guys named Waylor Tard and Wyler Tard, then we know it’s a bit.

Mike Trout – After getting hit on the hand, he left the game. X-rays were negative and he’s day-to-day. For Trout, that’s today to a day in 2023.

Adolis Garcia – 1-for-4, 2 RBIs and his 2nd homer, hitting .152. Started slow–OR HAS HE?! Eff me, Mr. Reversal Question, you scared the crap out of me. Frequent commenter, BAC, mentioned the other day that Adolis has shown a new approach so far — walks way up, and Ks down. Those things haven’t stabilized yet, but it’s good to see it.

Seiya Suzuki – 1-for-3 and his 4th homer. Absolutely clacking at people who were saying in the preseason Suzuki didn’t have power. In fairness, I was ready to accept a 25/10 season from him. Now we might get that by the break.

Ryan McMahon – 1-for-4, 2 RBIs and his 1st homer. Frequent fast starter, Ryan McMahon, is using the crockpot vs. the microwave so far this April.

Trevor Rogers – 1 2/3 IP, 7 ER, ERA at 12.15. Speaking of guys I told you to draft, well, I did reluctantly tell you to draft Trevor Rogers, but I kinda wish I had told you not to, and I ranked him much later than his ADP. His innings last year truly worried me, and I’m still worried. Hopefully, after his next start, Mr. Rogers doesn’t have me puKing Friday.

Elieser Hernandez – 6 IP, 1 ER, 6 baserunners, 5 Ks, ERA at 4.22. What kind of faith do you have Trevor Rogers will be more valuable than Elieser this year? 50%? What happens if Rogers throws a bad start next time out? 30%? Yet, you drafted Rogers about 200 picks before Elieser.

Bryce Harper – 3-for-5, 2 RBIs and his 2nd homer. Also, in this game, Kyle Schwarber (2-for-4) hit his 2nd homer. There wasn’t a lot of homers yesterday. You’d think we’d see more rise on Easter. At least from Jesus Sanchez or Jesus Aguilar.

Zack Wheeler – 3 IP, 7 ER, ERA at 9.39. *looks up to the heavens* Thank you so much for not letting Wheeler fall far enough in drafts that I was even tempted.

Byron Buxton – Day-to-day with a “nothing serious” in his knee. Twins are in a tough spot. You don’t want to rush Buxton back out there, but he’s only going to get 90 games played this year, and you don’t want 90% of those games to be at 85%, because then you might only get 50% of Buxton. Still, that’s some Bux, not a ton, palindromically.

Mitch Haniger Hit the IL with Covid-19. Everyone always said he had an infectious personality. Now I get it.

Matt Brash – 5 1/3 IP, 2 ER, 8 baserunners (6 BBs), 5 Ks, ERA at 3.38. Spinning out like one of those onomatopoeias from the old Batman TV show is BRASH! Spinning out is another word that we don’t see because it goes far left. Then spinning out is NO COMMAND and that goes high. As I said when Brash was a hot pickup in the first week, he’s going to roofie us, because he has no command.

Jose Urquidy 4 IP, 6 ER, ERA at 7.00. 180 degrees from Brash is Urquidy, who could stand to waste a few more pitches. He stays on the plate more Daniel Vogelbach.

Ryan Pressly – Hit the IL with knee inflammation. Send a sympathy card for the people who have rostered Hector Neris in the past and went back and grabbed him again for vulture saves. They’ve lost their mind, and you should send your condolences. Dusty said he’d use a committee, and I grabbed Ryan Stanek in a few leagues, but it was less that I wanted Stanek, or think he’ll get saves, and more because I didn’t want Hector Neris. Bullpen chart is updated.