Sound the small sample size alarm, because it’s time once again to cast season-long judgment on less than two weeks’ worth of data for players. But this is the information we have, and fantasy baseball is a reactionary game. We can’t pause our waivers or our FAAB to get a better, more longitudinal look at performance. We must act now. Who is rising and falling after two weeks of games?

I’m not sure if anyone predicted CJ Cron as the best hitter in the NL over the first two weeks of the season, but here we are. He heads the NL in home runs and RBI and is third in slugging percentage and OPS. He is batting fourth every day in a very dangerous Rockies’ lineup and is the only one on that team to suit up every game this season. What’s driving the success and is it sustainable? Well, a couple of obvious things are aiding the offensive numbers, but also a couple of things under the hood.

First, it’s never going to hurt when you play 10 of your first 12 games in Coors Field. That clearly is not going to continue, so it remains to be seen how Cron adapts to life on the road. Last year his batting average was 90 points lower on the road than it was at home. Second, he has a career-high so far in barrel rate and average exit velocity. His hard-hit rate is nine points higher than in any other season of his career. Are those numbers Coors-dependent? That remains to be seen, but it’s clear Cron is working on the first stages of putting together a career year. He has moved up in my first base rankings to around 6th for the balance of the season.

If I ask you to close your eyes and imagine what the Statcast percentile rankings chart looks like for Jesus Sanchez, I imagine you are thinking about something that looks almost just like this: 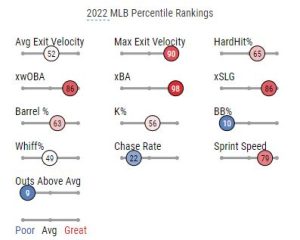 Power for days, strikes out a lot, doesn’t walk too much. Just wants to hit it to the moon every time up to bat. Well whatever he is doing this year, it’s working for him. Sanchez is off to a torrid start, slashing .333/.364/.595 through 44 plate appearances. He has launched two home runs with eight RBI already and his max exit velocity is officially in the top 10% of the league this year. So far, he has cut his swinging strike rate from 29.2% last season to 25.6% this year. That may not sound like a huge drop, but 3% less on 2,000 pitches seen in a year is 60 fewer strikes over a season. Sanchez was going late in drafts even by the end of March, and his power potential was just sitting out there for anyone to take. Those who took the risk look like they will be handsomely rewarded.

Yankees pitcher Nestor Cortes may think he is just some regular dude out there on the mound, but he is doing some very special things with the baseball this year.

Among all pitchers with at least nine innings under their belt this season, Cortes leads the league in K/9 (16.39), FIP (-0.27), and xERA (1.26). His real-life ERA of 0.00 can’t get any better, of course, and it’s mostly thanks to his devastating cutter, which he is throwing with increasing regularity.

He has, in fact, thrown his cutter exactly as many times as his fastball (both 36.9%). On that pitch, hitters have a .133 batting average and a .200 slugging percentage. The whiff rate on that pitch is an unreal 33.3% through his first two starts as well. After pitching just 93 innings in 2021, the Yankees are handling him with kid gloves, but he did get to go five innings in his last start. We can definitely bet the under on a 16.39 K/9 and the over on a 0.0% HR/FB rate, but this is looking like a pitcher poised to turn a huge profit no matter where you drafted him.

When Marcus Semien finished the 2021 season as a top-seven player on the Player Rater, it was safe to assume some amount of regression was coming as he took his talents to Texas. But good lord, this is certainly not what we expected through the first two weeks of games. His slash line of .143/.196/.214 through 46 plate appearances is most similar to the 2021 line of Aaron Nola, if that gives you some context. Aaron Nola is not allowed to hit anymore, but we are going to see Semien for at least 650 more plate appearances this summer if he stays healthy. What can we expect?

First, the BABIP (.171) is criminally low, so he’ll get a bounce back. But his average exit velocity is 83.9 mph, a career low so far. After the monstrous 45 home run season in 2021, Semien is selling out for it again. He has a whopping 60% of his balls in play as flyballs so far. Maybe that would work in the Dunedin bandbox last season, but that’s not gonna get it done in Globe Life Park, especially when they start closing the roof. There were some who believed Semien’s season last year was a product of an incredible 724 plate appearances. That may be true, but he will get enough to pile up the counting stats this year. But at the end of the day, with a much less potent lineup around him, Semien might be one of the least efficient players in fantasy.

Hey, Julio Rodriguez got a hit on Wednesday, raising his average all the way to .154 on the year! But maybe the real story is that he only struck out one time in the game. Coming into Wednesday’s game, J-Rod was striking out an astronomical 44% of the time, second only to Jo Adell in the majors. It’s somewhat offset by the 10% walk rate, but Seattle can’t really keep him in the lineup if he is striking out four out of every 10 at-bats, right?

We have seen Seattle play it safe with top prospects recently. Last season, Jarred Kelenic was sent back down after an abysmal debut. Would they repeat history with Rodriguez? We know the power and speed potential are there, but this screams of a rookie facing some growing pains in his first trip around the league. We should temper our expectations on J-Rod until we see how he can adjust to life in the big leagues.

How Sandy Alcantara has a 3.18 ERA through his first two starts I can not tell you. His FIP is 4.46 and his xFIP is 4.99. The strikeout rate has bottomed out at 7.15 per nine innings, and the walk rate is up to a lethal 4.76 per nine innings. We don’t have to press the panic button quite yet since it is just two starts against the Phillies and Giants, but if those numbers don’t improve, there will be much worse days ahead.

Perhaps chalk it up to shortened Spring Training, but both his fastball and his slider are down a full mile per hour in velocity in the early going. He is still mixing up his pitches well (four pitches thrown between 18% and 29% of the time), but that velocity drop is something to watch moving forward.