(NOTE: THIS POST WAS RELEASED EARLY THIS WEEK ON OUR PATREON. IT’S $10/MONTH.)

So the other day I was talking about how Joe Maddon was only playing Tyler Wade and Taylor Ward because it would confuse people into thinking they were in a sequel to Multiplicity and no one would be able to focus on trying to get them out, but, while I was saying that, I called them, Tyler Ward and Taylor Wade, and not one person corrected me in the comments, and y’all always be correcting me. See, I can’t even keep them straight. I’d attest Taylor Ward and Tyler Wade are the most confusing player names to ever be on the same team. They are more confusing than all of the Luis Garcias, because at least the Luis Garcias are all the same name. Taylor Wade and Tyler Ward–damn it! I did it again!–are so confusing, that their jerseys have the first two initials on the back before the last name, but their last names are not the same! The Taylor/Tyler Conundrum! Or rather the Twangel Dee And Twangel Conundrum! What if they don’t exist–Or what if they both exist but give different stats? Schrödinger’s Categories? Taylor Wade–Ward is your garden variety 25/2/.270 middle-of-the-order hitter. Your brand new version of Jared Walsh. Maddon also seems to love him, playing him every day in a good lineup position. Or he’s confused, and really loves Tyler Ward–Wade! He’s a 20+ steals middle infielder, who makes decent contact. Imagine David Fletcher. Now, forget him and picture someone with a name similar to Taylor Ward–Wade! No! Wait, Ward! I was right! I think. Anyway, here’s some more players to Buy or Sell this week in fantasy baseball:

Jonah Heim – If I were the Rangers, I wouldn’t have signed Marcus Semien or Corey Seager, but I would’ve signed Michael Cera to pitch to Jonah Heim, so prolly best I’m not running their front office.

Austin Nola – Between Nola and Heim, which do I want? Well, my first question to you is, “Are Sean Murphy or Keibert Ruiz or a whole host of other catchers not available?” Remember, these are catchers who are hot, and rostered in under 50% of leagues.

Daniel Vogelbach – He’s been barreling up everything, and he looks like he’d wear a barrel.

Patrick Wisdom – Giancarlo grant me the serenity to accept the things I cannot change, courage to stream hitters until one clicks, and the Patrick Wisdom until I find someone better.

Thairo Estrada – Has an alluring mix of speed and power — 15/7 last year between Triple-A and the majors in 365 ABs — but the Giants will absolutely platoon him because they platoon everyone.

Alan Trejo – Another Rockies rookie who was called up, but this one isn’t good, so, of freakin’ course, Bud Black is playing him!

Mauricio Dubon – You ever wanna call him The Dubonic Chronic? Ah, so some of you weren’t stoned in the 90s, I see.

Jack Burger – *snapping gum, holding pencil, writing down an order* “You want a side of Ty France Flies with that Jake Burger?” By the by, I went to look at the last week of stats for 3rd basemen and I vomited. Jake Burger’s actually looked decent, and, trust me, he’s been about as decent as Reese McGuire in a parking lot.

Maikel Franco – This is less about Maikel and more about trying to find 3rd basemen for you to pick up.

Alec Bohm – Here’s what I said the other day, “Bohm is an incredibly high-contact guy who has some light power. Think Ty France by way of Philly. Call him Chez Wit Whiz. I could see adding him everywhere to see if Chez Wit Whiz can emerge with everyday playing time and value.” And that’s me quoting me!

Jeremy Pena – Bit surprised at how long it’s taking for people to pick up Pena, but, then again, I’m going off the ownership numbers from ESPN, where a lot of the people playing there are like Robert De Niro in Awakenings. By the way, this is from February 4th:

Jose Siri – I am not a scout. Simply a guy who has watched a lot of baseball. With that said, watching Siri makes me think he’s going to be a surprise breakout star. He just looks like a great hitter. Then I see he had years in the minors where he went 24/46/.293, and I wish he could make more contact (35% K%).

Jake McCarthy – Projections love this guy — think 10/27 with a full season of at-bats — but looks to have the same issues as Siri — can you go 10/25 if you have contact issues? “Setting reminder for 10:25 to go get Tissues.” What? No, Siri, you idiot! “Sure, gray, looking for showings of ‘Look Who’s Talking.'”

Cooper Hummel – A lot of the DHs in the NL this year prolly envy Bumgarner’s career batting stats.

Tyler Alexander – Hadn’t seen anything like this in a while. There were next to no guys to recommend this weekend per the Streamonator, so I had to stretch a bit for a Streamonator call, like the call it makes to its Chamber of Commerce.

Kyle Gibson – Another Streamonator call, but not until Monday for lack of choices. “Is there any local attractions good for making friends?” Streamonator so lonely!

Tanner Rainey – Perhaps you don’t need saves. Perhaps I don’t understand how that could be. Perhaps you’d like to explain that to me like I’m five, so give me candy and illustrate using stick drawings.

Josh Staumont – At carnivals, Mike Matheny used to wear a giant metal pot on his head and have people gong it. So, he’s dumb as shizz, and it’s hard to predict the dumb, but he’s been using Staumont for saves.

Hector Neris – Ryan Stanek could get saves here too, but the Astros are saying Ryan Pressly will be fine to return after his IL stint, so he’ll be out for three months.

Spencer Strider – A new Jhoan Duran dropped! Wait until next week when Will Crowe’s the new Spencer Strider. Or maybe Michael King will be the Duran of Crowe’s Strider. Or maybe Adam Cimber will be the Crowe’s Duran of Spencer Striders. Wait, I know! Michael King will be the John King of Konnor Pilkington. Hold on, we forgot Kutter Crawford! By the way, I don’t know how Kutter Crawford’s mom took Kutter from her womb, looked at him, and immediately knew he was going to be a middle reliever, but there’s no other way to explain him being named Kutter.

Christian Yelich – I’m going to give you the screenshot you can use to bamboozle your leaguemates. 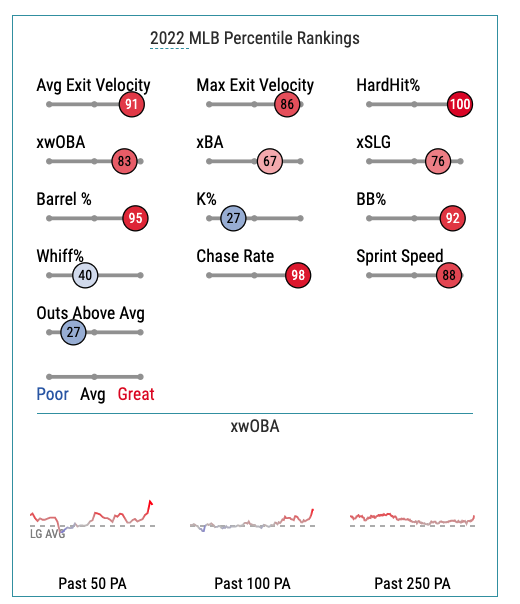 “Look at how great that looks! Christian Yelich is hitting everything on the sweet spot. Mah gawd, it is gorgeous.” That’s you on the phone with your uncle, who you’re trying to sell on Yelich. Then add some, “How’s Aunty Marilyn? Is she still taking classes at the local college to become a witch? Right, right, Wiccan. Yeah, she’s gonna be great at lighting dozens of candles in the shape of devil horns. So, we have a deal on Yelich?” You’ve laid it on real good. You hit him with the knowledge and pretended to be interested in his wife’s new hobbies, and why she’s wearing black nail polish. What he doesn’t know, what he can’t know (unless he did a modicum of research) is Yelich is a mess under the hood. “Under” the hood is appropriate too, because he’s hitting everything into the ground. He won’t be completely useless this year. I wouldn’t be shocked by a 22/10/.260 season with great counting stats. But if anyone thinks a 30-homer season is incoming, they’re gonna be disappointed. I wouldn’t sell him for your aunt’s The Right Way To Witch textbook but I would go to the Fantasy Baseball Trade Analyzer and explore options.