Yesterday, Jazz Chisholm Jr. (1-for-4, 2 RBIs and his 3rd homer) was moved back to the leadoff spot. Whatever was worked out between Jazz and Don Mattingly was worked out behind closed doors. There’s no way of knowing. What happened, if I had to guess, was Jazz said to Don, “I’m sorry for drawing a mustache on all the photos of you around the clubhouse. The Rollie Fingers-curl was especially insiderate. I still think your machismo is being undersold clean-shaven, but I respect your opinion.” Then Don replied, “And I’m sorry I said your parents have no taste for naming you after the worst Ken Burns doc.” Then later on, Jazz heard someone named John, thought it sounded too much like Don, and said this: 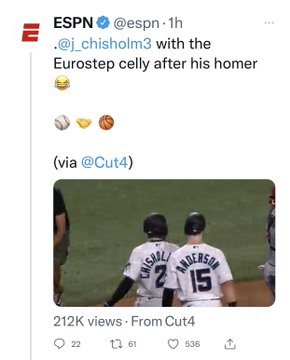 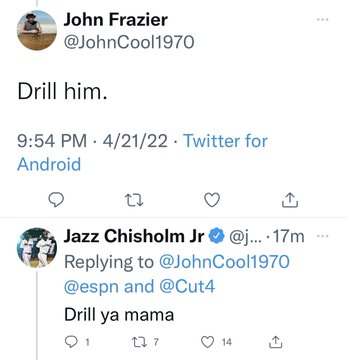 So, the Jazz drama’s prolly not done yet. I’ll admit to maybe being too reactionary about Jazz being a Sell in the 1st week because he was hitting 9th, and I’m glad Don came to his senses. Also, in this game, Jesus Sanchez (2-for-3, 3 runs and his 3rd homer), hit his third homer, and looks every bit of the sleeper I called him to be in the preseason. Speaking of sleepers, Rudy tells me the title means P = Pablo, Js = Jesus and Jazz. Mmmkay, and the Pablo Lopez (7 IP, 0 ER, 3 baserunners, 9 Ks, ERA at 0.52) I was very worried about in the preseason looked as good as the Rodon and Kershaw, who I was equally worried about. It’s a long season though, and it’s not exactly actionable to say Pab-Lo will just get hurt, but, well, that was the concern with his shoulder. Anyway, here’s what else I saw yesterday in fantasy baseball:

Byron Buxton – 1-for-4 as he returned from an injury that I’m still not sure what it was. Has it become, “Hey, I’m Byron Buxton so I’m supposed to be injured for five days to roughly three months so I’m sitting out today?”

Emilio Pagan – 1 IP, 0 ER and his 1st save. He won’t be in this afternoon’s Buy — which is already available on our Patreon — because I don’t know if I’d call Pagan the closer. I’m not sure he’s even the setup guy. Then again, he could get all the Twins saves. Only thing clear about that pen is how unclear it is.

Joe Ryan – 6 IP, 0 ER, 3 baserunners, 5 Ks, ERA at 1.69. Lot of people asking about Joe Ryan in the comments, and it’s not to find out if my favorite Joe Ryan was Harrison Ford, Ben Affleck or Jim from The Office. My problem with him early on was his command was wonky — 3.6 BB/9 going into yesterday’s game. That kind of thing can fix itself in two games. I don’t dislike Ryan now, I never did. It might’ve been a small sample issue.

Michael Pineda – 5 IP, 0 baserunners, 3 baserunners, 2 Ks, ERA at 0.00. What’s the opposite of 0.00? That’s his weight. Think if we popped Pineda open there wouldn’t just be candy. Dude is putting down some chicharrones. Streamonator hates his next start, and I’d be lying if I said I trusted him (with a dessert cart).

Jordan Montgomery – 6 IP, 1 ER, 5 baserunners, 5 Ks, ERA at 2.51. JoMo looks so good that I’m assuming everyone who keeps asking about dropping him hasn’t watched him. It’s the only thing that makes sense. Lefties don’t have a chance; righties just barely.

Jake McCarthy – 1-for-4 and his 1st homer. He’ll be in this afternoon’s Buy column. Not because someone stuck their hand up my butt and puppeteered me for McCarthy. Well, not the only reason.

Cooper Hummel – 2-for-5, 2 RBIs and his 2nd homer. I’m big-time interested in Hummel. Those little figurines get me so excited! Sure, I prefer porcelain, but copper is interesting–Oh, wait. Wrong forum. So, Hummel is interesting: some power, some speed, and solid contact. Likely more of a 15-team or deeper guy, but I’m monocole’ing.

Matt Davidson – 1-for-4 and his 1st homer, as he batted third. Fun fact! Mattmas in Spanish is David. So, unlike the White Sox lineup, we’ll get to it in a second, I’m not sure who I’d want hitting third in Arizona to replace Davidson. They have nine 9-hole hitters and nine 3-hole hitters.

Trevor Bauer – Had his leave extended another week. Something no one mentions about Trevor Bauer returning is how he is causing himself to miss games. MLB can’t investigate because the phone records were sealed. The phone records were sealed because he sue his accuser to cover his legal costs. A pittance for him, too. For ten grand, he’s dug his own hole. Trevor Bauer = a hole? Yup! Could MLB close his case without the phone records? Sure, but he’s giving them reason to avoid that. My guess was he’d be pitching by April, so I honestly don’t know, but that’s why he was so cheap in drafts. No one knows.

Jordan Hicks – 3 IP, 1 ER, ERA at 1.29, as he started the game. I guess it doesn’t matter how many innings guys throw, but how long is it going to take to stretch Hicks out? Four weeks? Shouldn’t he go to the minors and stretch out? Do people not do that anymore? Kinda being sincere.

Daniel Vogelbach – 1-for-4, 2 runs, 2 RBIs and his 3rd homer, and 2nd homer in three games, and first homer hit by a guy who people are like, “How does he find pants?” Hot schmotato alert continues to sound.

Sean Murphy – 3-for-4, 3 RBIs and his 3rd homer, hitting .259. Also, in this game, Cristian Pache (1-for-4) hit his 2nd homer. On my RCL team, I had both of these, and that’s one of those situations where you’re like: *Tigers Woods fist pump* …wait, it’s no brag having two A’s hitters… *Tigers Woods’s ex swinging golf clubs into the side of my computer while it displays my fantasy team*

Danny Jimenez – 1 IP, 0 ER, and his 2nd save, ERA at 0.00. Trivino is likely to take the closer job right back, when he returns, but Dan-Jim, no relation to And-Gim, is my best bet for saves in the interim.

Eduardo Escobar – 1-for-3 and his 1st homer. Was kinda bummed I didn’t get Escobar in more places in the draft season, because I think he was undervalued. Middle of a good order, and could hit 27 homers. Sound great? No? Have you seen the current crop of 3rd basemen?

Anthony DeSclafani 5 IP, 5 ER, ERA at 6.08. Singlehandedly disproving the theory that all Giants starters are good. More like DeStinkturnonafani.

Mike Jastrzemski – 2-for-4 and his 1st homer. Carl’s Jr. Jr. doing it better than Jake Burger.

Julio Rodriguez – 0-for-5, 4 Ks, hitting .136 Also, Jarred Kelenic went 0-for-3, 2 Ks, hitting .154. The Mariners should start a dry cleaning establishment, because their rookies be pressing!

JP Crawford – 1-for-4, 3 RBIs and his 1st homer, hitting .310. With each homer by a player (all three of them in the league), I look at the player’s recent games to see if a hot schmotato is rising, and Crawford, like many, hasn’t done much.

Drew Steckenrider 2/3 IP, 2 ER, ERA at 3.18. I’d say Kazaam!, but I don’t even know who the Mariners’ closer is. Was it Steckenrider? Sewald? Castillo? Can Steckenrider take PEDs so I can call him Steckenroider? I got questions, y’all!

John Gray Hit the IL with an MCL sprain. Ugh, someone went medieval on his knee.

Franmil Reyes – 2-for-3, 2 RBIs and his 1st homer. Ain’t gonna put all my bad juju on the $54 Vending Machine Steak by counting down his homers from 50, but he’s totally hitting 50 homers this year.

Louis Robert – Left the game with a tweaked groin. We need everyone to put down whatever it is they’re doing and form a giant prayer rectangle.

Leury Garcia – 0-for-3, 1 run, hitting .069, as he batted third. Batting Leury Garcia third is called in the business, “Does Tony La Russa need a wellness check?”

“Not before and only Leury Garcia since, have I seen a three-hole hitter like this man.” — Tony La Russa at Albert Pujols Hall of Fame induction ceremony

Jack Burger – 1-for-3, 1 run as he plays over Vaughn. Elias Sports Bureau has announced this is the first time that two burgers were ever in the same lineup (Nothing – 3rd, Jake – 8th).