Pierre Gasly pauses as he tried to recall exactly how many seasons he’s raced in Formula 1.

Sitting in the AlphaTauri hospitality suite in a bustling Imola paddock, the one-time grand prix winner has to take a moment to work out that he’s now in the midst of his fifth full F1 campaign – and fourth with the Faenza-based team.

Contracted until the end of the 2023 season, Gasly is on course to beat Daniil Kvyat’s record of most race starts with the Red Bull junior squad, formerly known as Toro Rosso.

But as the news Carlos Sainz Jnr (another product of Red Bull’s young driver programme) has signed a contract extension with Ferrari breaks shortly before RaceFans’ exclusive interview with Gasly begins, talk inevitably turns into his own future.

“So this is my fifth year in Formula 1,” Gasly says, after taking a second to count the years since his late-2017 debut.

The last 12 months have been lucrative for Formula 1’s golden generation of exceptionally talented under-25s. Max Verstappen capped off a world championship title by signing a monster six-year extension, Lando Norris committed his future to McLaren at the start of the season and George Russell’s Mercedes dream has finally manifested after three seasons spent toiling away at the back of the grid .

As happy for his peers as Gasly has been, the 26-year-old admits he feels he deserves to be mixing it with that formidable company out on the track every race weekend.

“I see Charles in a Ferrari, I see Max in the Red Bull, George in the Mercedes, Lando in the McLaren – I’ve been fighting with these guys all my career,” Gasly says. “I know that’s where I belong and I want to get my chance to be in this position as well.”

However this isn’t an unfamiliar position for Gasly – quite the opposite. Back in 2019, the then 22-year-old was handed the opportunity of a lifetime to move into the Red Bull senior team alongside Verstappen as Daniel Ricciardo’s Red Bull replacement. But half a season later, a points deficit of 118 to the future world champion led to his brutal demotion back to Italy, where he has remained ever since.

What followed were the three most rewarding, yet challenging, seasons in his racing career. From the highs of his Monza win and his unexpected podiums to the crushing disappointment of losing one of the best seats in motorsport and the more devastating loss of his good friend Anthoine Hubert, Gasly has been admirably honest about his emotions over the last few years.

One year ago Gasly wrote a one-off piece offering a refreshingly frank insight into the emotional toll and pressure of being a modern Formula 1 driver, especially when grieving. Gasly says that he is not one to shy away from expressing his emotions.

“I’m someone who is very honest. I have nothing to hide,” Gasly says. “I think it’s fine that things should be spoken out, sometimes.

“There are things which have to stay confidential – especially as a professional, I’ve never released confidential details – but I was in a moment where there was obviously the loss of Anthoine which was really heavy to go through and to process. The change of team at the same time. There were a lot of things which were said which were not true or not with the right information.

“For me, I just felt ‘okay, this is also me. This is Pierre Gasly, this is how I am, this is how I feel’. We’re all human. We can be athletes – we are seen as athletes – but at the end, there is a human behind every driver. There is hurt. Emotions. Mentality. It just felt for me that it was important to kind of move on from this negative spiral which I had for these first six months. It was just something important to myself. And obviously by far the most challenging time I’ve ever had to face as a driver.”

Rather than wilt, Gasly met disappointment with determination. Facing all his F1 dreams disappearing in front of him, Gasly kept his chin up and got his head down.

“Growing up, I always believed in hard work and discipline and believing in that process — that as long as you keep doing the right things, the right outcome will happen at the end,” he explains.

“And that’s the mentality I went through all these years. I mean, at this stage of my career, these are the cards that I have in my hand. How do I play best with what I have in my hand? Whether it’s the best cards or not, doesn’t matter. This is my game and I got to make it work with these cards.

“At the end of the day, work doesn’t lie. Here, we are all talented. Everyone that is in this paddock is special. All brilliant drivers. Some a bit more exceptional than others, but at the end of the day, we all are super talented. And to make the difference, you’ve got to work on the small details that will bring you the X-factor compared to others.”

Still very much a part of the Red Bull ecosystem, Gasly has only strengthened his case for a second shot at the factory seat now occupied by Sergio Perez since returning to AlphaTauri – especially after claiming a stunning victory in Monza in 2020 and his regular top five qualifying results in 2021. Although he admits his admiration for the job Perez has been doing at Red Bull in 2022, Gasly says his sights are still set on reclaiming what was once his.

“I feel ready,” he says. “I felt like I’ve shown my potential. I’ve shown that I’m able to deliver once I get the tools that I need in my hands to do it.

“But then after, I also understand them. It’s their decision – I’m fine with that. I think what’s important is that, at the end of the day, when you work with a team – a team works with a driver or a driver works with a team – there needs to be that common will and desire to do it together. Whatever it takes. There needs to be the will to do things together, to have the same target in mind.”

While he offers no excuses for the performance gap between himself and Verstappen over those early months of 2019, Gasly believes his abilities are so far beyond those he possessed three years ago that he is practically a different driver.

“The driver I am today is way better than the driver I was after one year,” he insists. “If they saw at the time I was the right fit for the team after such a short time, then now there are even more reasons to think I’m prepared to get that seat.”

Watching drivers younger than him secure long contracts that should keep them at the front of the field contending for podiums, wins and even championships, it would be easy for Gasly to become frustrated or even disillusioned with Red Bull. However, he says he values ​​still being a part of Red Bull’s program and will wait for his opportunity, even while he sits on the cusp of a fifth full season with AlphaTauri in 2023.

I think I’ve always said, at the moment, my priority is to discuss with [Red Bull] and they will always have the priority over others,” he says. “Because I’m very grateful for everything they’ve done in my career and that I’m aware that I’d never be here without the support of Helmut and Red Bull over these past years.

“I’ve told [Helmut] last time that actually this is the longest relationship I’ve ever had in my life, you know? Nine years with Red Bull. It’s been eight-and-a-half years of success, fighting for all the best positions, having a very, very successful ride together. There were the six months that didn’t work out for the reasons that we know.”

Compared to the consistent high performance Gasly and his team enjoyed last season, 2022 has not started quite as successfully as either he or the factory would have wanted. At the time of our chat Gasly lies 12th in the championship. Although he echoes the thoughts of many of his fellow drivers that the new technical regulations for 2022 have achieved their goal of improving racing, Gasly says he’s not entirely satisfied with the impact the new rules have had so far.

“From a racing point of view, I must say it’s been more fun,” he explains. “I think we did achieve some of the targets which were made with the regulation changes. Is it as good as we would have liked? As long as it’s better, for me, I’m not going to complain. It has had a positive impact on the racing, which is most important. More overtaking, being able to follow more closely.

“The only thing is, I wished that the whole field was closer than it is. I was really hoping, ‘okay, we can see more midfield cars getting closer to the podium positions’. And in the end, last year I had more chances to be in the top five than I have this season. So on that side, it was the only little setback, seeing at the start of the year that Ferrari is on a league of their own, Red Bull sort of managed to get there as well. And then after, there is not like a small gap – it’s like a pretty big world to catch up with these guys. So this is the only downside.

“But I think it was more like dreaming this is achievable when we know in motorsport, every time you’ve got a regulation change. Mercedes got the best of it the last eight years, now Ferrari seems to get it right and slowly I think we’re going to catch up, but it’s probably going to take time.”

With his place at AlphaTauri and in Formula 1 secured until at least the end of next season, Gasly at least knows he has some time ahead to try and help build his team back up to the level of performance they enjoyed last year. But he is also confident he will get an opportunity to make his case for a return to Milton Keynes at some point in the future.

“This is a conversation we need to have that we didn’t have yet,” he says. “Right now, I probably think it might be too early, because it’s also only 2022 and the focus is on making the best season possible with AlphaTauri.

“But I’m sure there are going to be conversations and see what’s good. I know they are happy with the way it works for them at the moment and that also works for me. Checo is doing very good there, so it makes sense. But then, at the end of the day, I also need to look at my own career and what’s best for me, what will give me the most chances to achieve my personal goals, which is to be a world champion over the next few years .” 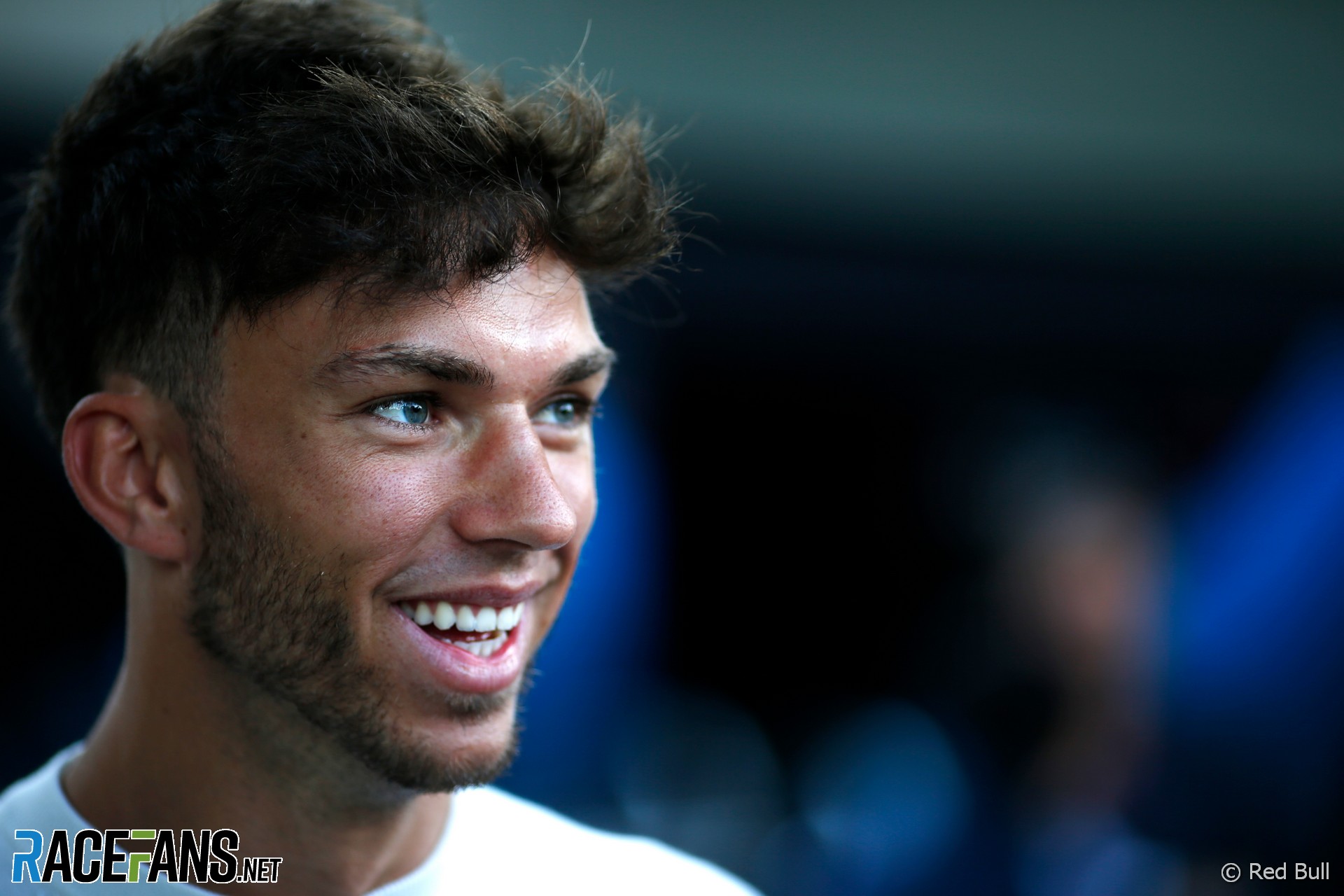 RaceFans is run thanks in part to the generous support of its readers. By contributing £1 per month or £12 per year (or the same in whichever currency you use) you can help cover the costs of creating, hosting and developing RaceFans today and in the future.

Become an RaceFans Supporter today and browse the ad-free site. Sgn up or find out more via the links below: