It’s gonna be May! [insert Justin Trousersnake GIF]. I wish writing this stuff was as easy as being in a boy band. If only I had been born with small pores and the ability to dance! Instead, I got this weird gene that keeps my feet locked on the floor, which also ruined any potential careers in basketball, rock climbing, or being a high wire trapeze artist. Apparently, I got the gene for spotting semi-useful fantasy pitchers as well. Thanks, mom! That’s my recognition of Mother’s Day — Mom, you were the one who gifted me this ability to stare at numbers and make sense of them. In another life, I could be that guy in the Matrix who stars at code all day and sees “blonde, redhead…” and so on. But in this life, I’m 20 years beyond the production of Garden State and still wondering how people in the aughts thought The Shins were going to change music forever. Good job Hollywood! ENYWHEY. Let’s see what I can do for your fantasy teams this week!

Tyler Mahle: JKJ asked in writer’s chat if Mahle was toast, and to my surprise, the other writers said, “Yes.” Am I so out of touch? No, it’s the kids who are out of touch. [makes steamed hams] Through his first 5 starts and that 7+ ERA, Mahle has faced 120 batters and was responsible for 20 of them crossing home plate. Yeesh. But wait — is that shrine to Gamblor, the God of Variance I see you worshiping at? Within that embarrassing 20 ER mark? Mahle had allowed only 1 home run and 3 barrels. 120 batters. 3 barrels. That’s insane. Let’s frame this another way: Mahle is the second-best pitcher in MLB 2022 at preventing barrels in the cohort of pitchers with similar batted ball events (80+). OK, the BB/9 near 5 ain’t stellar. But we’re talking about a 7+ ERA pitcher who has a sub-4.00 xERA and FIP and is invoking weak contact at a career-best rate. The Reds are a disaster and even Charlie Sheen could only must a 3-win season there this year, but Mahle’s not the reason for the poor performance. If anything, he’s a pitcher you’ll want to target in DFS and do your best to hold until regression hits and he’s back to the SP3 you were expecting.

Robbie Ray: After JKJ got the Mahle thing going, Coolwhip was worried about Robbie Ray. Aren’t we all? I put on my Robbie Ray compression pants whenever I feel nervous. Wearing them feels like a hug from grandpa. Also, don’t ask me about my grandpa. ENYWHEY. Robbie Ray hasn’t allowed a barrel in his last three games, but the overall stat line is yawnstipating — 2 wins, 7.5 K/9, 4.38 ERA. He’s still going with the two-pitch approach in 2022 (OK, 2% curveball usage, sue me), but his fastball is down 2MPH compared to last year. Bingo — problem found! Could Ray still be warming up after the short off-season? Did he change tailors? Whatever. It’s not uncommon for pitchers to start slow and then let loose when it’s warmer. We’ve seen Ray’s fastball already speed up nearly 1.5MPH since his season debut (91.5–>92.99/93.7 in his last two games), so better times are coming.

Alek Manoah: Let’s do that thing where we put stats from mystery players next to each other:

Come on, did you even read the start of the article? Player A is Alek Manoah and Player B is Tyler Mahle. So, this comparison table? This is why I hate fantasy sports. Analytically-minded players instantly recognize that Mahle is playing just as well as Alek Manoah, but Manoah’s variance in the “good” direction for fantasy creates wins for fantasy mavens. Manoah’s 4 wins — which puts him on pace for 24 wins on the season — is tied for the league lead. Mahle’s variance in the “bad” direction for fantasy has probably torched a couple of fantasy teams already. Manoah has more wins…than the entire Reds team (he said at the time of writing). Regression usually happens, which means that both Manoah and Mahle are heading towards the same ERA. So, is Manoah more like Mahle, or is Mahle more like Manoah? We’ll find out soon! That’s why we watch the game! What’s more, regression tends to happen very quickly. For Manoah, we’ll probably see his “negative” regression in the form of a win drought; if that regression doesn’t come, his early stat line looks remarkably on track to be a 2022 version of 2021 Julio Urias; Urias ended as SP3 on the year. Even so, if Manoah normalizes towards his projections, he’s got top 20 SP potential for the rest of the season. His elite control in 2022 is a great step forward, and the early-season returns look like a great dynasty league investment.

Shane Bieber: Some days you’ve got it, some days you don’t. Before Saturday, he had a 2.45 ERA and 3.01 FIP. Then came 7 earnies and 3 walks in 3 innings with no strikeouts. Can’t even say that he got unlucky (cue Un-Pharrell and Un-Daft Punk). These things happen <— things my mom said to me every time my friends abandoned me at the park. I'm not worried about Bieber comma Shane. Now Justin? That guy scares me.

George Kirby: Georges Kirbé — top pitching prospect alert! Remember how good Spencer Howard, Nate Pearson, MacKenzie Gore, Triston McKenzie (must be a McKenzie thing…), Casey Mize, and Matt Manning were last year? We all love some prospects but the truth is, sometimes they need a bit more playing time than their rookie year before they’re useful for fantasy. Last year’s top rookie pitcher — Trevor Rogers — was the #90 overall consensus prospect. The second-best overall rookie pitcher was none other than the unheralded Luis Garcia, who had never played above High-A ball. In terms of WAR, the best “premier prospect” rookie pitcher in 2021 was Logan Gilbert, who finished 6-5 with a 4.68 ERA. Fantasy studio! I’m not saying Kirby won’t be good or won’t be useful for fantasy in 2022. What I am saying, is that prospect pitchers are very risky. If you remember back to my pre-season post about timing, you’ll remember that Max Scherzer, Jacob deGrom, and Zack Greinke were all pitchers that needed several years before they topped the MLB and fantasy charts (Scherzer and deGrom were older than 30 before leading the league in Ks, and Greinke had nearly 5 years as a starter before leading the league in ERA). My best wishes to Monsieur Kirby for a delicious 2022. For you fantasy managers wishing to roster Kirby — you do you.

Framber Valdez: The Frambimal…wait, that doesn’t sound right. Frambdextrous…that sounds like a Dr. Strange villain. FV…how FanGraphs! Whatever. Valdez has a 7.2 K/9 and a 4.2 BB/9 on the year. This is not a recipe for success. On the plus side, his last outing finished with 7K and only 1BB…against the Detroit Tigers. Sigh. The Big FV is worth fantasy attention, but that K/BB ratio has very few comps for enduring success. Hopefully, he can face the Tigers a few more times and figure out his control issues.

Kyle Hendricks: 1-3, K/9 under 7, and an ERA and FIP above 5. I’m gonna keep harping on this all year. You think I forget what the big sites are trying to do to you? I’m like Pepperidge Farm: overpriced and usually dry. Wait. I never forget. That too.

Miles Mikolas: We’re [and I write this like we’re a community, sharing coffee and thinking about pitchers] a few years out from Mikolas being fantasy relevant. You know what an agent can do for you? $17M a year when you’ve got basically 1 year on your resume of above-average MLB experience. You know Shane Bieber’s making $6 million this year, right? Miles Mikolas has made nearly $40 million to pitch 60IP while all Bieber did was go and win the Cy Young. What a world! Now as you go out into that work world this Monday, ask yourself: am I Miles Mikolas, or Shane Bieber? ENYWHEY. Mikolas is suddenly fantasy relevant again because he’s doing that Zack Greinke thing where they rack up innings with meh K-rates and low walk rates. Mikolas’ true skill stats are nearly 2 points higher than his ERA, which indicates that Mikolas is due for major regression soon. And all those fantasy managers who are strutting through social media with Alek Manoah and Miles Mikolas saying that they’re in first place now? Watch what happens in another month. Hey Siri, remind me in a month to make fun of Kyle Hendricks.

Mitch Keller: I don’t really like Keller, but he’s leading the league in ERA-FIP discrepancy by a fair amount. His true skill stats are at a tolerable 4-ish level. He’s a deep league add if you’re looking for a starter. Acquire in 12+ team leagues.

Zack Greinke / Josiah Gray: Same as above but in the opposite (bad) direction — these are the pitchers who lead the league in FIP-ERA discrepancy (along with the other true skill stats), meaning they’re in for a tough time coming up. Now’s the time to trade these guys.

Add these guys: As of Sunday, my system says these guys are under-owned in RCLs: Tyler Anderson, Brock Burke, Jalen Beeks, Jakob Junis (back in MLB and started on Sunday), Blake Treinen

For those of you who are visually inclined, here’s a graph of the top pitchers. It says the same thing as my chart, except it’s organized horizontally instead of vertically. I’m a creative genius! 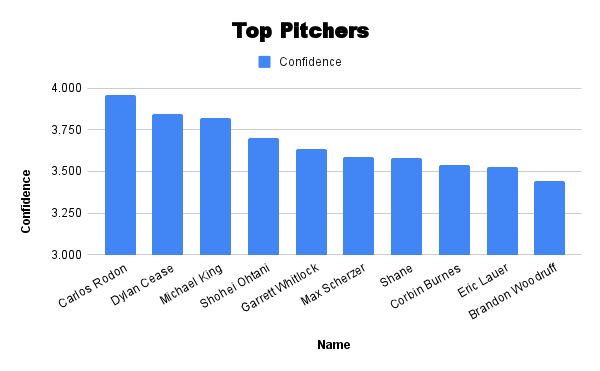 Always do a sanity check. I’m providing free data that quite literally has a better or higher correlation to fantasy efficacy than many sites that charge an arm and a leg and don’t answer your questions. That said, I’m human and make mistakes; I also submit the article on Sunday so there’s a bit of lag. The source of this data is none other than Razzball itself. So, if you are winning money or having a great time reading the articles, please consider a subscription to the site or drop me a line in the comments and let me know I’m not wasting my life away for naught.