(NOTE: THIS POST WAS RELEASED EARLY THIS WEEK ON OUR PATREON. IT’S $10/MONTH.)

Jonah Heim – Get him to the Greek! Greek is what I call my catcher slot because it’s the last thing I want to fill.

MJ Melendez – Royals are working Melendez into the lineup any way they can, which bodes well for his future playing time, and at-bats. Plus, unlike some other well-known MJ’s, this one can hit.

Adley Rutschman – Some rumors that he could be called up any day now, so if you’re in a position to stash him, then do it now.

Josh Naylor – Just gave you my Josh Naylor fantasy. It was written why listening to the new Kendrick Lamar, and saying it’s for the culture.

Christian Walker – Someone the other day mentioned Christian Walker’s Statcast page. He does look better than he’s looked in the past. Launch Angle up, but not absurd and he’s making much better contact. Don’t think this is some kind of breakout, but it’s good to see vs. just clearly a guy overperforming. Speaking of Statcast:

Brandon Drury – Is this hot schmotato anything more than a guy who happens to be hitting a well? No, but let me ask you this: Who cares? He’s hitting, grab him.

Nolan Gorman – With DeJong being demoted like a limo driver that only carries whole grain mustard, Gorman could be called up at any time. Honestly, not sure what the Cards are waiting for.

Andres Gimenez – Been solid, endgame MI, but — and that but follows me everywhere I go — I wish he’d steal more bags. I can find counting stats and the occasional homer, a guy who could steal 25 bags but only steals 12 leaves a stale taste in the chompers arena. Chompers arena is what I call my mouth, deal with it!

Mauricio Dubon – Is it me or do the Giants make superstars into the least likely castoffs from other teams, but can’t develop any prospects? (It’s not me.)

Royce Lewis – True story, I went to look at the 7-day Player Rater for shortstops, and found literally zero guys to recommend. So, this is more, is Correa going to be out longer than expected? Then great! (Not for him.)

Jose Iglesias – He has zero power, zero speed, but he might hit .300 this year. “Hey, Jose Iglesias, excuse me, Nick Madrigal called about a trademark infringement, and he has Luis Arraez on the line too. Are you available to take the call?”

Alec Bohm – Meh, let’s not spend too much time here, since ESPN says he’s not rostered in 50% of leagues, but I doubt that’s true.

Maikel Franco – The predicted-by-Donkey-Teeth-four-years-ago MVP year from Maikel Franco might finally be here! Or he had a slightly better than mediacre month. Hard to say!

Colin Moran – It’s hard to know if it’s worse to be abandoned by the Pirates, or not. It’s not like the Pirates have great scouting, or front office, or organizational management–Okay, they don’t have much, but what a lovely park.

Yadiel Hernandez – The good news is this Cuban raftee is finally clicking as a 34-year-old. The really good news is Jose Barrero still has hope. The bad news is he’ll have to wait another ten years. The guessing-at-something news is you didn’t expect to read about Jose Barrero today!

Alek Thomas – As I said the other day, “Our hitter prospect projections are pretty favorable for Al Tom, and you can kinda see why when you look at his profile. Speed/power and great contact — yes, please and thank you. He was on Prospect Itch’s top 100 prospects for 2022 fantasy, and he called him a 15/15/.280 type, but upside, my lovelies, upside.” And that’s me quoting me and linking to Itch!

Ramon Laureano – Wonder if he stands in a hall of mirrors and starts singing The Ramones. These are the kind of thoughts I deal with, regularly.

Ben Gamel – You have to pick him up, because Mat Gamel sacrificed himself so Ben could thrive. Do it for Mat Gamel! Who is Mat Gamel? Uh, his brother. Pick up the crumbs I am laying down, son!

Jack Suwinski – Hopefully he gets a banner outside the stadium soon, like these that honor other great Pirates players like Anthony Banda. 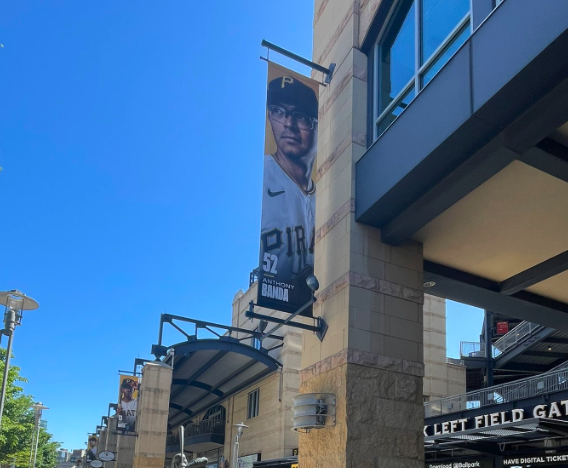 (That is so freakin’ funny to me. Imagine celebrating Anthony Banda. I guess you can’t raise a banner that reads: Service Time Manipulation.)

Tommy Pham – Feels similar to Bohm in that Pham’s gotta be rostered in most leagues. From Pham to Bohm: Guys that Make You Go Hm.

Vidal Brujan – Wish Brujan was on a team that would play him, but then he wouldn’t be developed by the Rays, so he’d suck. Ugh, that’s a Catch-22…Oh no, a bobble! That’s an E-22!

John Gray – This is a Streamonator call, like the call it makes to roadside assistance.

Yusei Kikuchi – This is also a Streamonator call. “I’m on I-95 by the Ho-Ho-Kus Overpass”. Could you send someone out with some time to chat?”

Dylan Floro – Reminds me of one of my favorite Italian rappers, Parme$an and his song, “From the Window to the Floro.” He should be getting saves in Miami for at least a few months until he’s traded in July, but he had a very inauspicious beginning to his season, so he might get all the saves, or none. Bullpens, man.

Brooks Raley – I said I would give you a middle reliever to grab, in addition to the closers, but I’m not sure what Brooks Raley is. Closer? Middle reliever? The kid in To Kill a Mockingbird?

Penn Murfee His name cracks me up. It sounds like a Martin Short character. Who spells Murphy as Murfee? Was his family collectively dropped on their head? Anyhoo! He’s yet another lights-out Mariners’ middle reeleefer.

Starling Marte – Incredibly, he has the worst exit velocity among everyday hitters in baseball. I’m shocked he’s even got the worst average exit velocity on the Mets, considering they have James McCann. For what it’s Cronenworth, McCann’s ranked 160th in the league, or around the middle, and Starling Marte is ranked numero worsto. Jed Lowrie’s hitting the ball better; David Fletcher is hitting it harder; Whit Merrifield has been better–Okay, literally everyone. I’ve never seen someone’s Statcast look this bad. This makes Ozark’s final season Statcast page look like Giancarlo compared to Marte. You thought Lindor’s previous season was bad? Marte might one-down that. Wouldn’t trade him for another true crime podcast where they just read off the serial killer’s Wikipedia page, but I would go to our Fantasy Baseball Trade Analyzer and explore options.